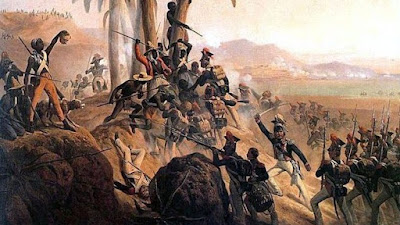 Here's a "fun fact," rarely told (in a way that makes sense) in American history:

The deal known as "The Louisiana Purchase" (which famously doubled the size of the United States on the cheap) was only offered to Thomas Jefferson because France's plantations had been overthrown by blacks - France needed to get some money, quick, because they knew there wouldn't be more coming from slavery in Haiti.

So, considering the black Haitian's role in fucking up France's plans for world domination, is it any wonder why America and France insure Haiti stays one of the poorest places on Earth today?