"At this moment in America, religion and politics are at a flash point. Conservative Christians deplore the left-wing bias of the mainstream media and the saturation of popular culture by sex and violence and are promoting strategies such as faith-based home-schooling to protect children from the chaotic moral relativism of a secular society. Liberals in turn condemn the meddling by Christian fundamentalists in politics, notably in regard to abortion and gay civil rights or the Mideast, where biblical assumptions, it is claimed, have shaped US policy. There is vicious mutual recrimination, with believers caricatured as paranoid, apocalyptic crusaders who view America's global mission as divinely inspired, while liberals are portrayed as narcissistic hedonists and godless elitists, relics of the unpatriotic, permissive 1960s."

- The slightly off-kilter, but always fun to read, Camille Paglia

I haven't written anything in a while because, honestly, I can't type and, without that singular talent, I just can't find the time. I'm working with the homeless now, which can be all-consuming, so I've quite-obviously reverted to giving you a bird's-eye-view of some cultish stories I've seen (a little too obviously, for my taste, but what can I say?) I know, they don't give anyone a true picture of the world as I see it, but it's all I can do right now.

So what do I see out there? I see the cultish Democrats failing - and failing miserably - in their efforts to undermine the greatness of America. George W. Bush and the Republicans are, finally, kicking ass and taking names later, leaving the Democrat-controlled Congress and Senate in a mess of (primarily) their own making. From stopping the war to Global Warming, the Dems have over-stepped, over-sold, and over-heated the debate to the point where, finally, any rube with half a brain - which is all most Democrats think Middle America has - can see through their delusions. It's all over now but the fat lady singing. I even think a Republican may make it to the White House, though I have no idea which one. 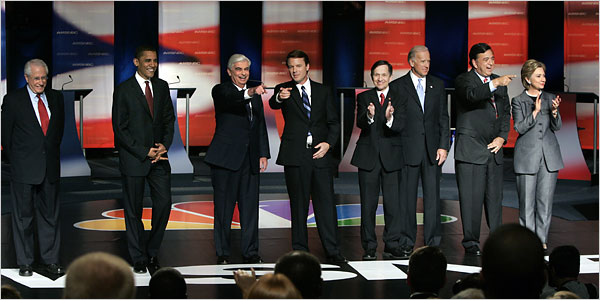 There's some bleating that religion and spirituality is starting to take up too much airspace in the Presidential race (which is silly) but, as you can expect, that warms my atheistic heart to it's core: Get it all out, I say, all of it: Mitt Romney believes in the racist, raping, rantings of his very-dead cult leader, Joseph Smith. Cultish Hillary has talked to the very-dead Eleanor Roosevelt. Mike Huckabee is a very-dead Evangelical liar. Obama has the New Age's living dead, Oprah, campaigning with him. They're all very alive, politically, and all very nuts. But that's what you get when Americans mistakenly confuse Freedom of Religion with the idea you've got to respect all beliefs. I respect none of them and, with a few exceptions, think all the candidates should be sent packing and we start over fresh - yea, with all new beliefs too. Hey - even an atheist can dream.

Ike Turner just died. That's a shock. I never thought Rock 'N' Roll's true Prince of Darkness would ever keel over. That one man did more for Pop music than probably anyone else - by making it dangerous - and nobody gave him the time of day for most of his life. True, a lot of that was his own fault, but, mostly, it was because of "Tina" (and the fact people could get along with her made-up ass better than the authenticity of him) but the true talent wasn't ever in the body of Anna Mae Bullock, that's for sure.

In a perfect world, Ike Turner would've strode this earth like a God - which is a scary thought - but there it is. He deserved more than we gave him - and that's coming from a guy whose nephew is just finishing up a 12 year prison stint from merely getting involved with Ike's family.

Speaking of prison, musically and culturally, I'm enjoying the rise and fall of Sharon Jones and Amy Winehouse. Jones, a San Quentin prison guard, has the band Winehouse borrowed (The Dap-Kings) and is tearing up the stage while Amy (who makes good records but is boring on stage) is coming apart because her drug-addict husband is in jail for being an idiot. (Can anybody say "Rehab"?) The synchronicity, alone, is almost enough to make me believe in,...something. Interesting musical side note: It's taken over two years, post-divorce, but I can *almost* listen to music for pleasure again. (Anything regarding passionate love is, still, off-limits.) For that, alone, I'll never forgive my ex for what she's done.

Speaking of my ex, Karine Brunck (her brain scan can be seen above) - and getting this post back on track - the Pagan's Homeopathy campaign is finally showing signs of wear. England has shut down four out the five Homeopathic Hospitals there and the poor Homeopaths are complaining they have to supplement their incomes with other nonsense like Acupuncture. Aww. I guess killing men, women, and children, isn't as good for business as they thought. Of course, I'm hoping the ripple-effect kicks in, and this trend starts to spread world-wide - like to France - where my new favorite frog, Wissembourg's Dr. Robert Wohlfahrt, does his dirty work. The stupid murderous bastard.

O.K., on that sour note, I'ma get out of here. I'll try to actually write more when I get the chance but, like the homeless, I never sleep these days and that can make things, like having an actual life, tough. Still, you're in my dreams when I do.