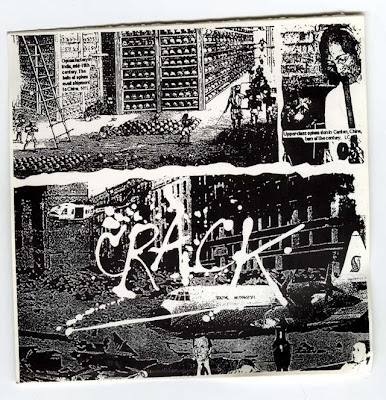 Wow: it feels like I haven't posted in, like, forever. (When you write as often as I do, even a *slight* return to real life - i.e. "offline" - can seem like a betrayal.)

I put up a few more music tracks, on the post with some of my album covers, so if you're interested in what I do - beyond talkin' shit - then go get 'em. They're all favorites, from my pre-conservative days, back when I thought working on shit like this postcard, above, was deep (the Ralph Steadman-like "crack" was my contribution to that particular revolution). You live, you learn. 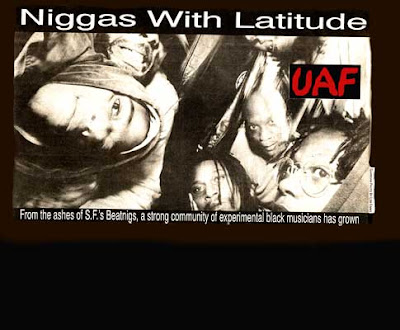 Sometimes people hear my older stuff and find it hard to believe I'm the same guy but, yea, it's still me: I've just gotten from underneath everybody else's thing, and can, finally, speak my mind without worrying about the leftward tilt that's always been expected of me as a performer. (I'm partially-pictured with Kevin Carnes' U.A.F., above, in the top left.) Plus, I've always been "harder" than the people I've played with - and I've never liked Clinton, or cultish behavior, so none of this is really new.

Hell, in some ways you could say I went so far left politically, and as an artist, that I merely came full circle. It works for me anyway. All parts of the whole. 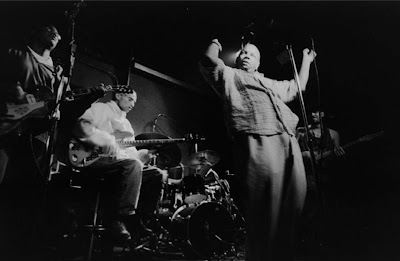 Writing and playing my own stuff probably has a lot to do with it: I can remember working with Consolidated on their "Play More Music" album and just feeling that, no matter how much I love those guys and/or how talented they are, their politics and mine just weren't the same.

And though my first Little White Radio (above) was filled with my hand-picked guys, they were playing with other bands too, so it wasn't really my thing yet. But - check it out - I did have my "electric shaman" feeling by then! And - hey - check it again: the guy sitting down in the picture, playing bass, is Ubi Whitaker: Bob Dylan's god son! Not only that but - for anyone who discovered Storm Large on that American Idol-like TV show, Rockstar: Supernova - check out who the Storm was blowing people out with back-in-the-day (that's her on the right): 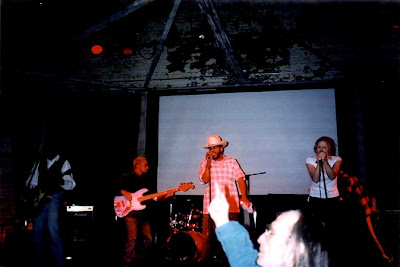 Sigh. Oh well: I'm ramblin' and reminiscin', I guess. I just wanted to get something down before I returned to my usual reading. I'll probably be up late tonight, catching up on all the latest haps.

People have been trippin' since they reported we've been in Iraq for 5 years, and now they're all worried we're headed to Iran. Those people worry about everything. I swear, civilians have got to learn to get a grip: 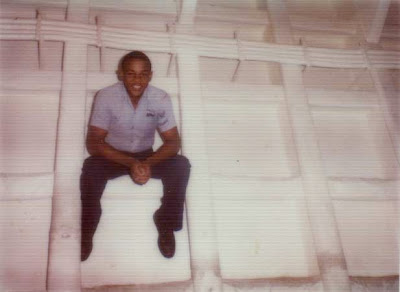