How We Really Are Now (Part II: King's Lead Hat)

O’Brien makes it clear that Hunter has some kind of unreported charismatic power, but doesn’t quite explain what Edwards saw in her that would prompt him to put his campaign (and party) at risk. … 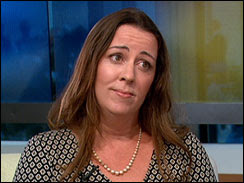 Really? Out of the many bloggers we read and respect, Mickey Kaus is no slouch in the Thinking Department, so it seems odd to us he'd need more help from O'Brien (above) to sort that particular issue out.

Especially when she opened her piece this way: 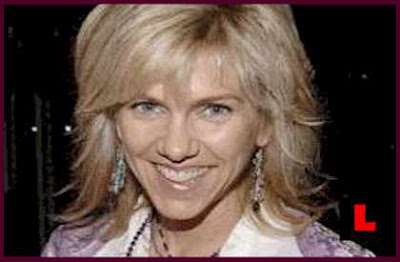 Lisa Druck was trouble,...Yet we liked her. There was something charming and feral in her aggressive bubbliness. The seedier stuff bothered my prudish self, stories of strip poker and non-monogamy. But I was seeing her ex-boyfriend and if I wanted to keep him out of the riskier stuff, I had to like her. So I did.

If you ask us, that's a lot for Ol' Mickey to work with - even if O'Brien is describing Hunter in the 1980s. Fortunately, she doesn't stop there, and paints a more recent picture of Hunter: 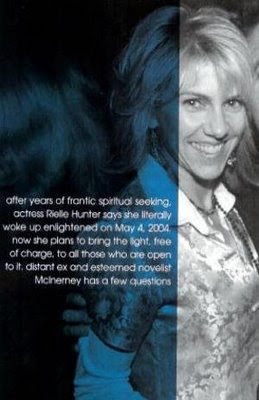 In 2004 I went to a dinner party for the anniversary of [our friend Jay McInerney's book] Bright Lights, Big City in New York, and there she was. She looked and acted nothing like frenetic, drama-dragging Lisa. We became fast friends, again. Lisa -- now Rielle -- was living in Boulder, in the carriage house of her former mother-in-law. I was doing publicity, website design and marketing. She wasn't doing a whole ton of anything, but she had some ideas.

A foundation was the center of the work, which we broadened to a website as a way of marketing her voice and image for a possible TV show, the "MTV guru." Rielle's friends Bob McGovern and Randy would help with logistics. We made a website. She paid for the domain name, I paid hosting. We spent five, six hours a day on the phone, gabbing and working.

She was really good at the guru stuff. Once I was on a miserable, rainy client trip. I moaned to Rielle. She was impatient, not loving my issues. "What are things you want?" she barked. I babbled about wanting prompt payment and value in my personal life. "No," she cut me off. "Money and love. Can you get those today? On this day? In the rain?" "Well, no..." I stammered. "Then focus on today. What's in front of you to do. The path. Don't be attached to outcomes. Don't DO, just BE." Oh. Ok. And the money and love came in time, as they will.

Soon the foundation and the website -- Being Is Free -- spiraled into too many months of fruitless work. I abandoned it. We spoke less, but a few months later, she was back on the beam. She had a crystal clear vision of what she wanted, and had moved to the New York area to stay with her friend Mimi. We rapidly filled in the site: her bio, cringingly titled 'Story of My Life,' a story of awakening called 'Shift Happens,' and 'Kids on Board,' the ever-important board of directors, which was mostly just a list of people helping Rielle. I came and went from this list. It was a fun gauge of how useful I was to old Lisa Druck.

Two sections remained blank: 'Fame I Am Lives Forever' and 'Where the Money Goes.' It's funny how those came in time, as they will.

As she made forays into yoga instruction in New York, there abruptly came a two-day silence. When she surfaced, it was loudly: "I met someone!" Her voice was thrilled. He must be really something. "What's his name?" "JOHN!" she sang. "Does he live in New York?" "No, North Carolina!" North Carolina? I pictured a skinny bearded guy, with enough money or mojo to catch her eye. "He's married," she quickly added, "small kids." 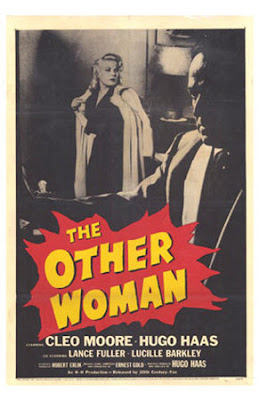 And there you have it. In Part I of this series, "The Safety Dance", we observed the bizarre, yet seemingly deliberate way bloggers discuss religion and spirituality, in an apparent attempt to avoid whatever troubles can arise from appearing to do so. Mickey Kaus appears to be engaged in just this behavior when he suggests that, with the wealth of information O'Brien lays at his feet, he somehow needs more before he can figure out what was going on between Edwards and Hunter.

But, in case we're wrong, let's clear it up for him: 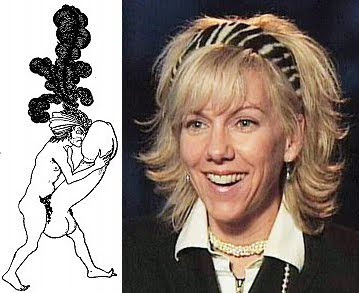 A self-styled guru, spitting mindless pabulum like "Don't DO, just BE" (as in "Be Here Now") and is either into teaching or learning yoga to better bend over for married fathers? 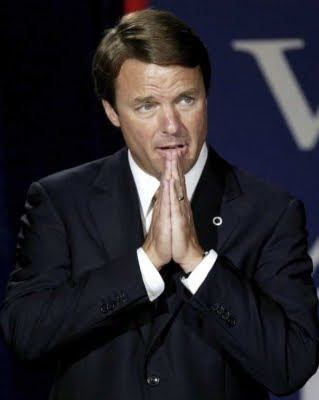 The attraction was NewAge and sex, Mickey, though not necessarily always in that order. 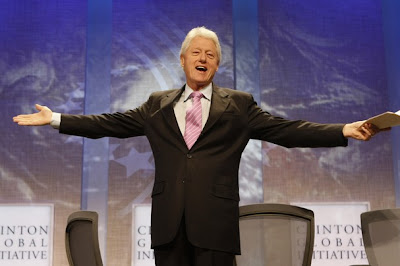 Now before you say that's not enough for Edwards to "put his campaign (and party) at risk", we will remind you only one of them was necessary for Bill Clinton to put his presidency at risk. Also, Clinton, too, has shown a weakness for NewAge psychobabble, working as he has with Tony Robbins, and as his quoting cult leader Ken Wilber proves:

Secretary of State Hillary Clinton has also been known to agree with Wilber's "Theory of Everything", as well as cavort with NewAge psychics.

But let's get back to Rielle Hunter and John Edwards:

I struck up a conversation with the woman at the next event, as we waited outside. She told me her name and asked me what my astrological sign was, which I thought was a little unusual. I told her. She smiled, and began telling me her life story: how she was working as a documentary-film maker, living with a friend in South Orange, N.J., but how she'd previously had "many lives." She'd worked, she said, as an actress and as a spiritual adviser. She was fiercely devoted to astrology and New Age spirituality. She'd been a New York party girl, she'd been married and divorced, she'd been a seeker and a teacher and was a firm believer in the power of truth.

She told me that she had met Edwards at a bar, at the Regency Hotel in New York. She thought he was giving off a special "energy."

...I would soon learn that there was no such thing as small talk with Rielle Hunter. She told me that she'd felt a connection to me when we'd first met, that she could tell I was a very old soul. This meant a lot to Rielle. Her speech was peppered with New Age jargon—human beings were dragged down by "blockages" to their actual potential; history was the story of souls entering and escaping our field of consciousness. A seminal book for her had been Eckhart Tolle's "The Power of Now." Her purpose on this Earth, she said, was to help raise awareness about all this, to help the unenlightened become better reflections of their true, repressed selves.

Her latest project was John Edwards. Edwards, she said, was an old soul who had barely tapped into any of his potential. The real John Edwards, she believed, was a brilliant, generous, giving man who was driven by competing impulses—to feed his ego and serve the world. If he could only tap into his heart more, and use his head less, he had the power to be a "transformational leader" on par with Gandhi and Martin Luther King. "He has the power to change the world," she said.

I had been nodding and sipping my wine through all this. "Do you talk about this stuff with the candidate?" I asked. "All the time," Rielle replied. "I'll lecture him on it when he's getting too much up in here," she said, gesturing toward her head. "He'll see a look on my face and say, 'Yes, I know, Rielle, "Power of Now" says …' "

...She hoped that with her unique eye for Edwards's true potential, she could show the world the real John Edwards and, in the process, help him to become the better version of himself. 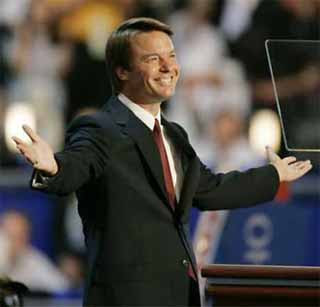 So what's our point? We wouldn't hesitate to place a bet that somewhere around a quarter of the Democratic Party is somehow involved in some form of NewAge spirituality or another - and all without the public's notice or understanding of how it influences their leader's choices or what a politician's occult beliefs actually mean. 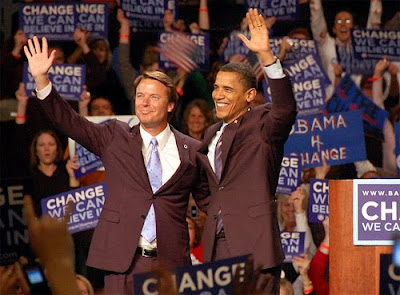 We'd also be willing to wager, if the public knew these things - and we mean really knew - they'd leave the Democratic Party in droves. 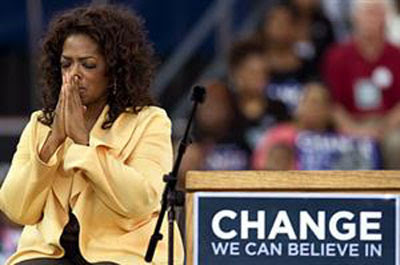 That goes double for blacks. 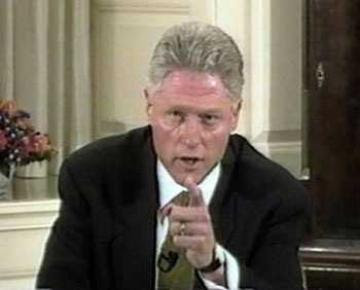 And it is TMR's contention they have every right to know. That it's about time somebody started speaking the truth about what's going on with the NewAge belief system in particular.

But what, exactly, would we tell them? Consider: 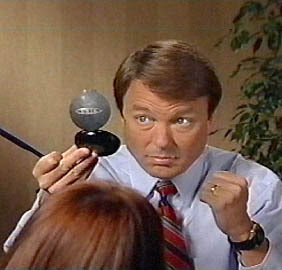 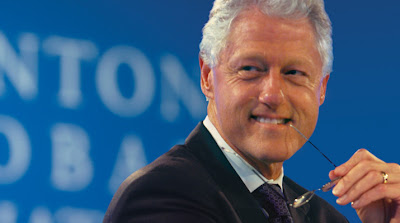 And, since we all remember Bill Clinton was also seen, somehow, as America's "first black president" (until reality set in) we think that's also a pretty good place to start.