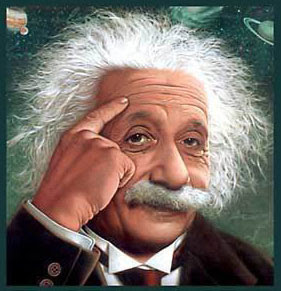 "Poor old Albert Einstein. He not only gets dragged in whenever religious apologists want a good scientist-quote about God – despite this fairly unambiguous statement: 'I do not believe in a personal God, and I have never denied this, but have expressed it clearly' – now he’s being used to support a laughable 'scientific' case for psychic powers.

The ESP Enigma: The Scientific Case for Psychic Phenomena, by Diane Hennacy Powell, cherry-picks a line from a personal letter to build its nonsensical argument. You might think that was a little unfair, since the letter was one of condolence to a friend’s widow. But even if you don’t, it’s still ridiculous.

The quote reads: 'Now he has departed from this strange world a little ahead of me. That means nothing. People like us, who believe in physics, know that the distinction between past and present and future is only a stubbornly persistent illusion.'

According to our review (full disclosure: I haven’t read the book. I can tell you it’s piffle without doing that, though), Ms Hennacy Powell uses this to suggest that Einstein’s theories imply the possibility of precognition, or seeing the future.

Now I admit it is possible that Einstein kept his thoughts on ESP to himself, only revealing them in an obscure letter a few months before he died. Maybe he also declared his love of ouija boards in some graffiti on a toilet wall, or wrote a pseudonymous horoscopes column for the National Enquirer. But it seems more likely that he was referring to his rather better-known general theory of relativity, which showed that time and space are relative to each other and gravity. Not that spoon-bending weirdos can predict the future through dreams."

-- Tom Chivers, whose byline states he's "regularly startled by the stupidity of intelligent people" - unlike TMR, which is regularly disappointed in stupid people's lack of intelligence - like Diane Hennacy Powell, the latest NewAger attempting scientific duplicity to sell her bullshit beliefs, in The Telegraph, U.K..