The Man Who Fed The World: Norman Borlaug 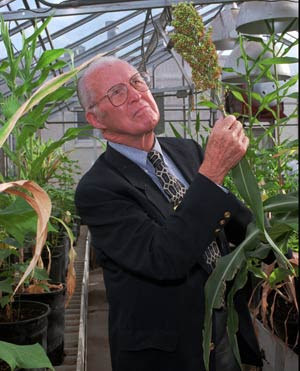 Norman Borlaug, the man who invented what went on to be known as "Frankenfood", has died. Environmentalist idiots around the world attacked his inventions, but this one man is credited with feeding more people on the planet than anyone in history.

Of course, now that he has passed on, those same pussies are claiming him as the spearhead of the "Green Revolution" but I know how he was regarded in his lifetime by these hypocritical jerks and - though everyone should know his name, and what he accomplished should be taught in schools, everywhere - the fact that most people don't have a clue about him can be laid right at the feet of Leftist assholes who became enraged whenever he, and his inventions, were mentioned. Why, I remember bringing a dinner (of all things) to a standstill by merely uttering his name:

I was in France, in the city of Toulon, staying with Karine Anne Brunck's (AKA my ex-wife's) cousin, Jerome - a dandy who didn't regard having an American guest as an opportunity to be gracious but one of finding a captive audience for his insane political diatribes.

This white frenchman - who, in his office at work, labored under a huge Palestinian flag - would never let a chance go by to, alternately, heckle and lecture me on his views of American values, American foreign policy, and, of course, his hatred for George W. Bush. (I still wasn't calling myself a conservative then, but had merely mentioned that I was reassessing my views of the president.) It got so bad that one day, during a party, after he had started up again for no other reason than to attract the laughter of his other (french) guests at my, and my country's, expense - and after I had already begged him to lay off - I almost smashed his fucking head in with a gardening tool. Honestly, it was only for the sake of decorum and, admittedly, self-preservation (I was clearly outnumbered after I first throttled the creep) that I'm not sitting in a french prison today.

Anyway, one night we were having a dinner of Duck l'Orange at this asshole's house, when he started up again, going on about this and that, which created an opening for his butt-ugly, pot-bellied wife to furiously mention (as she went from cutting her meat to viciously stabbing it) the "horror" of Americans sending "Frankenfood" to Africa. I, trying to be cool, said little (I had gotten too used to this nonsense) but that one got me:

This bitch was attacking Norman Borlaug! For feeding Africa's poor?!? For feeding the world!?! WTF?!?

I fucking lost it like I was Hank Hill:

"Now look here, Marie Antionette, you and little Napoleon here can talk all you want about the war in Iraq, Abu Ghraib, George W. Bush, or any of the other hard-working white folks you fruity white piss-ants think aren't "authentic" enough to be Americans - like you know anything about it - but when you start dissing the man who took it upon himself to feed the world's poor, while you little worthless bitches do nothing but criticize, eat this crap, and live the life of Raleigh, then you've gone too-fucking-far!

My people, and especially Norman-fucking-Borlaug, have changed this world in ways you dumbshits could never comprehend after thousands of years on the planet - starting with controlling electricity, the telephone, and the goddamn airplane that brought me here to listen to your ignorant shit - so, in light of all that, I've got news for you, your country, your history, your big-mouthed husband, and all of your ugly shit-eating resentments for my country and it's people, no matter what their color:

You faggot ass frogs ain't getting the world back!"

And, with that, I put a huge lettuce leaf in my mouth, folded my fucking arms, and chewed mightily. And I can honestly say, up until then, I'd never felt more American (or conservative) in my whole fucking life.

R.I.P. Norman Borlaug. You did GOOD, buddy. You were a man amongst men, and a champion to more people than will ever know your name - by a long shot. I, for one, have busted with pride over your accomplishments and will be forever grateful for all the hard work you have done. I love you, man.

In a world where too many people can't think of anything better to do with themselves than to waste their lives - as evidenced by the messages in their Twitter accounts - you have been both an example, and an inspiration, to us all.

Like too many before you, you deserved much, much better.