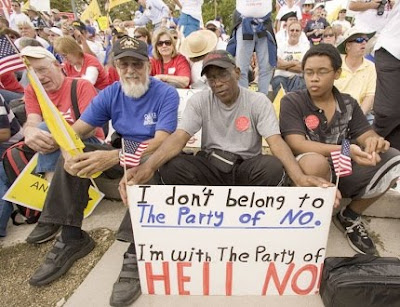 This photo is catching on, both, because it's funny and emblematic of the conservative feeling out there - The Macho Response.

Yea, I knew this was going to happen, and - without a true leader to step up and channel this force into something more politically constructive - it's got the potential to get ugly. But I don't see such a leader out there.

Michael Steele sure ain't it. And even our conservative commentators and media people - except for Rush, Beck, and Bill Whittle - are pretty sorry. Most are so wrapped up in being gatekeepers (you've got to be a certain kind of conservative figure now - acceptable to Malkin, Reynolds, etc. - though, for inspiration, they're now at least posting photos, like the one above, of people who look, think, and talk like me) more than they'll allow any of this the kind of free expression it deserves.

I mean, where's "professor" Glenn Reynold's expose' on what's behind the artwork at Rockefeller Center, like Glenn Beck gave us? Where's Michelle Malkin's breakdown on the infiltration of NewAge into Democratic Politics like I do? They won't go there, and yet they're two of the most read and celebrated commentators out there, turning up their noses at anyone - except for Beck - who has the temerity to say "You guys are waaay too focused on the wrong things."

I was reading Stacy McCain's blog this weekend - the post where he's preparing for battle with Little Green Footballs' increasingly insane Chuck Johnson - and he's going on about how he likes certain conservatives "because they fight" but, while I found it thrilling, it couldn't help but remind me that, despite being on the same side, me and Panda Bear are out here, pretty much, fighting alone.

Too rowdy, online, to be acceptable offline to these people, who we have to practically hide our thoughts and identities to maneuver freely around - if you can call it that.

This situation screams for us - an angry citizen's revolt against a black president's healthcare plan? - but we're the last people these yuppies-in-charge will call. Like Roger L. Simon with that stupid hat, they'll keep on taking the stage themselves, acting like they can fulfill the calling, until something happens to make it clear their avoidance of what liberals always call "the real issues" hasn't given them any understanding of what real people need, or where to go from here.

They're all out of touch - "no one is representing their interests" - but, unfortunately, I'm not "connected" and I can't type.

So that's all I'm saying.