Even For Hollywood: This Isn't Twisted Enough? 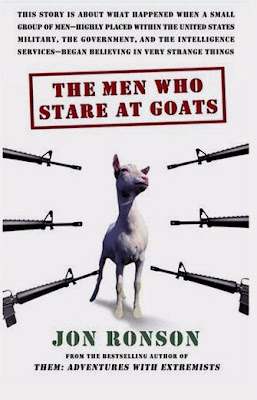 "The Venice film festival has capitalism in its sights this year, with premieres of Michael Moore's documentary on the U.S. economic meltdown and a drama starring Matt Damon as a corrupt corporate whistleblower.

[George] Clooney, who has a home in Italy and is a local favorite, appears in 'The Men Who Stare at Goats,' about a reporter who stumbles across a U.S. military unit in Iraq which employs paranormal powers on its missions."

-- Mike Collett-White, with news that's shocked me - because, not only did I discover the book a long time ago, but I didn't know this Boomer NewAge disaster had been made into a movie - a situation which, of course, Hollywood decided to play as a comedy - and (leave it to those lying liberals to twist shit) the real story has nothing to do with Iraq - all showing how much news can get left out, even if you're relying on Reuters.