The King Of All Hippies & The Modern NewAge 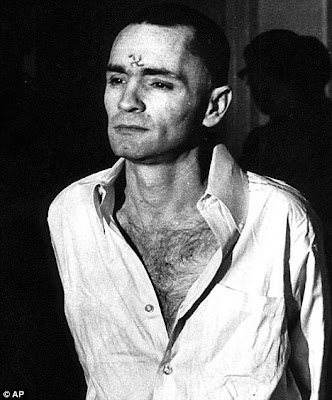 "Born in 1934 to a 16-year-old prostitute, Manson appeared as 'No Name Maddox' on his birth certificate. A miserable childhood was punctuated by humiliations such as when an uncle dragged him to church in a dress 'to learn to fight and be a man'.

At 13 he was the youngest ever inmate of Indiana County Jail. He became a career jailbird, with each release followed by arrest for offences ranging from car theft to rape. Bright as a button, he read voraciously in prison, hoovering up titbits of philosophy, religion and mumbo-jumbo that he would later regurgitate in the guise of a guru."

-- Damian Corless, telling us gorgeous bits about Good Time Charlie's early years (which fit perfectly into the NewAge hippie template) you know, the part no one talks about - as they continue to sell NewAge beliefs everywhere - except, occasionally, in The Independent.