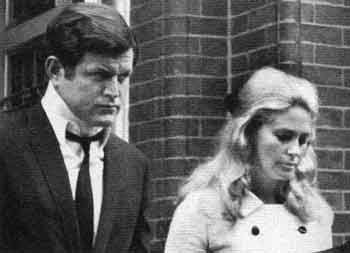 "Joan Kennedy, the former wife of Massachusetts Sen. Edward M. Kennedy, is in the hospital recuperating from a concussion and a broken shoulder after a passer-by found her lying in a street, according to her son.

'Were indebted to some anonymous pedestrian who found her and picked her up and got her help,' Patrick Kennedy told the Boston Herald for its Wednesday editions.

Details of exactly what happened and how she ended up in the street were unclear. There was no police report on the incident. Joan Kennedy, who divides her time between Cape Cod and a Boston condominium, has struggled with alcoholism."

This story, from 2005, is a glorious moment in Ted Kennedy's life. That's a photo of Joan, above, standing by "Teddy" after he killed Mary Jo Kopechne in what we now know as the great hippie epoch called 1969.

What a wonderful time. What a wonderful guy, looking like the cornered rat that he was. He divorced Joan, of course, and pretended the rest of us would pretend along with him, that he was a great person, if he continued to stand up for doing the wrong thing - under the guise of helping the little guy. You know, me - but not Joan, the woman he swore fidelity to. I think they call it "paying lip service" or something like that.

Anyway, look at his face there in good ol' '69. That's the real Ted Kennedy. The guy who, from that day forward, could never tell Mary Jo's parents what happened that night. The guy who claimed remorse but couldn't admit the truth. The Catholic who paraded himself as an icon of virtue, until he died, because his rotten Democratic Party would reward him for not giving answers - even for lying, divorce and murder - just as it let Bill Clinton (a Baptist) get away with defaming Monica Lewinsky, and gave Gavin Newsom 75% of the vote to become mayor of NewAge San Francisco after he was busted for cheating with his best friend's (and campaign manager's) wife. Yes, indeed, the Democrats are a party of players!

Well, it's been a party alright. And now it's over for the guy who lived with a lampshade on his head. Good riddance.