"No One Was Going To Stop It" (Today's Theme) 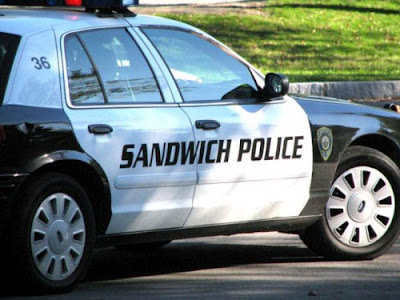 Was Prakashanand Saraswati, the spiritual leader of Barsana Dham, a lecherous old man who in the mid-1990s groped several teenage girls who lived on the ashram south of Austin? Or was he a devout holy man who has been made the target of a malicious smear campaign?

The two dramatically opposing views were aired in opening statements by prosecutors and defense attorneys Wednesday in the trial of the Hindu guru devotees call Shree Swamiji.

The 82-year-old Prakashanand has pleaded not guilty to 20 counts of indecency with a minor by sexual contact for allegedly groping two teenage girls more than 15 years ago. Each charge carries a potential sentence of up to 20 years in prison.

The proceedings in Hays County District Court are under unusually tight security. Three plainclothes officers kept a close eye on the courtoom, which was packed with spectators; two officers shadowed prosecutors as they came and went. District Attorney Sherri Tibbe declined to explain their presence.

In opening statesments, prosecutors characterized the girls as members of dysfunctional families that lived at Barsana Dham and placed the interests of their guru above their children's well-being. Even though their daughters told them they were being groped, "their parents did not protect them," said Assistant District Attorney Amy Lockhart.

The two girls "were raised to believe in this religion, and they believed in Swamiji," she added. "He was like a grandfather to these girls."

But, Lockhart added, when the girls entered their early teens, "their belief that Swamiji was an innocent and divine man who was celibate and devoted to God began to change" when he kissed them and touched their breasts. The girls, now in their 20s, were reluctant to come forward for fear of angering and estranging their families who lived on the ashram, she said.

"If they spoke out, they could be punished," Lockhart said. "They and their families could be exiled. Besides, no one was going to stop it."

Not then. Not now. Not ever.