Celebrating The 50th Anniversary Of A Long Time Ago

If you truly want insight into the conservative mind - and evidence they were the Democrats of yore - just listen to the spin they put on America's racial history today. I did, and they sure don't sound like the party of Lincoln:


"Jim Crow is ancient history. The Fox News position on Obama’s remarks—that Christianity’s sins ended many centuries ago—has a bit of trouble with Christian defenses of slavery and segregation. No problem: Just backdate the falsifying evidence. According to Rush Limbaugh, 'Jim Crow’s not around today. A thousand years ago, yeah. But not today.' Huckabee chides Obama for talking 'as if it was Christians who were responsible for racism in America.'”

Now why would they be so disingenuous,...?

It's Happened Too Many Times For Me To Get Happy 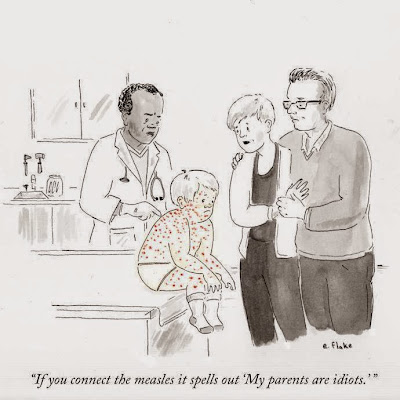 "Somehow, we’re slowly losing a debate to a group of people who are spectacularly, demonstrably wrong." - Slate

Measles are only a symptom of our problem, not the problem itself. The problem is our creation of a society where long-discredited NewAge beliefs can - literally - not only allow hold off the entirety of our medical profession, but (with hardly any criticism what-so-ever) elevate a dingbat like Jenny McCarthy to the position of a respected spokesperson on "The View" - a women's "information" program. They do this, even as they insist this is a meritocracy.

Today I wander a city where I hear my friends openly speak of "karma" and "energy" and "spirituality" as though these things are real. They shop in the Whole Foods homeopathy section. They treat chiropractors as doctors, support "detox" centers, and think the Dr. Oz's of this nation dispense real medical information. And they're experts in ostracizing as loony anyone who says different. As a friend recently insisted before the measles story broke (when I criticized her promotion of the discredited NewAge belief system of astrology) what people - such as these scientists and I - need to do is "get off your high horse" and let them do their thing unimpeded, otherwise, we're assholes, oppressing them. Being correct is not only considered irrelevant but very, very wrong. And they have the total support of the world around them as they do so. I mean, if you think like this, I'll bet everything I have you're employed, liked, and maybe even respected.

This is why I refer to my current existence in terms of living with Nazis. Like a Jew during WWII, being correct - or innocent of the charges against me - hasn't mattered, even when death is involved. There's a celebration of my downfall involved here, just as Germans laughed at the Jews being hauled away to the camps. I'm the problem, now, just as they were for the Germans, right? Nothing could be more obvious. That my wife killed three people, just as NewAgers have infected children, hasn't brought me much, unless you count friends cruelly forgetting who I am, and deciding to question my sanity instead.

If not that, there's the expectation that I - alone - can fix what doctors and lawyers and other desperate people, caught in this jungle of misinformation, cannot. Or that I should just shut up, and go along, to make things easier on myself.

Or that I should write. Nevermind that I've been writing about this for 10 long years. Or the obvious fact I'm not a writer. It's all on me.

As Frank Zappa said, when your story is "Man Against Society," bet on society.

I can never forget that, with the exception of token efforts, not a single "friend" I have has seriously offered to help. And why should they? They know they, then, will be ostracized, called crazy, or an asshole, and few of these NewAge women will like them - who wants that?

They might as well join me in the "crazy" demand of reparations for crimes against blacks. That's the other issue those who have listened claim is "too big" for them to get involved in.

As long as there's no upside they can see - because there's no right or wrong beliefs - there's nothing anyone will do or have to. Fuck justice. Fuck the kids. And fuck me. Like these kids with the measles, I can and will die while y'all congratulate yourselves on your having "made it," using the system of beliefs you hold to elevate yourselves professionally and make you feel good.

Posted by The Crack Emcee at 11:14 AM No comments:

The Day "A Nation Of Cowards" Discovered It IS Scared (Of A Black Man Seeing More Clearly Than They Do,...) 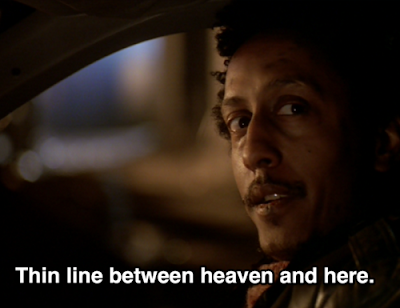 All at once, TMR's "crazy" man ain't so crazy after all:


"Homeopathic cold and cough 'medicines' for children don’t work. So don’t buy them."

And now that the damage is done, and Rand Paul and Chris Christie have made fools of themselves, they're even taking an equally hard-line as mine has been:


"Vaccines Should Be As Nonnegotiable As Seat Belts, Experts Say" 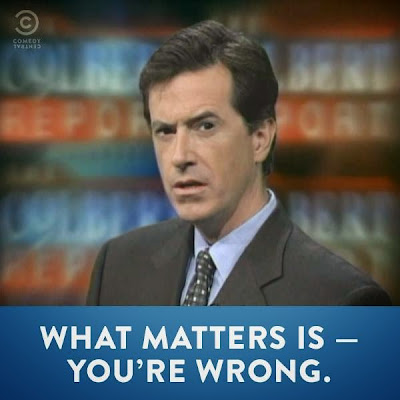 I won't wait for long-time readers - and especially not other bloggers - to admit it,...