We Can't "Move On" Because We're Still Here 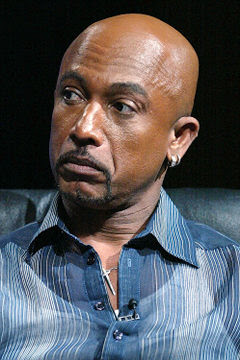 "He'll say, 'Let's just forget about this and move on.' And you can't just forget and pretend like the last few years didn't happen."

Wyntergrace Williams, talking about her absentee father, Montel Williams - and how he employs typical NewAge strategies when she does see him - which (surprise, surprise) don't appear to be working, in The New York Daily News.

Look at that face. And see the cross dangling around his neck? O.K., I just wanted to make sure we're on the same page about who we're dealing with here.

I've written several times about NewAgers imploring others to "move on" after they've hurt them, but this quote is golden because Montel is such a sleaze (and he's so closely associated with that "psychic" slime, Sylvia Browne, who also closely links him - whether he or she likes it or not - with "the mother of NewAge", that walking skullface, the one and only Louise Hay) it's just such a pleasure to see he's following the script to-the-letter - even with his kids.

That's the commitment of the bullshit artist, writ large.

And it appears Montel is full-time a bullshit artist. According to Wyntergrace, along with giving his kid an absurd name (with an even more absurd spelling) this man, who holds himself up as a role model for others, also engages in the very non-NewAge pastime of screaming at her, with his poor dear daughter asking, "Why should I talk if I'm just going to get yelled at?" (Sounds to me like somebody's not trying to bring much "harmony" to the household,...) But how could he not yell? The man's been "married" - you know: that thing you publicly promise a spouse and the community you're doing, once, forever? - well, Montel's done it three times. He must care about others so much it hurts.

Why, based on what his kids have to say - he's also got a son, imaginatively named MonteI, Jr. - I betcha Montel Williams risks losing it every time he has to look in the mirror. I betcha. I betcha he even has to force himself to take that look. I know I would.

That is, if I was as big of a scumbag as Montel.