Of course, TMR has always been aware of - and has never bowed to - this hateful aspect of the world that's been built up around us, but then that's why so few care for TMR: 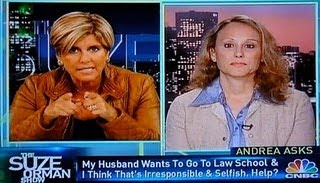 UPDATE: It's too easy:

"Well, Suze Orman is back at it again, playing the henpecking man-hater who tells women to get divorced from their husbands for making what she perceives to be financial mistakes. I thought she had started to recover from her man-hating, sexist ways, but I was wrong. I watched last night's show (Sat, Feb. 27th) and she had on Andrea, a real winner of a wife who met with Suze to basically castrate her husband, Joe, without his even being present. Ms. Orman stated that Joe was supposed to be on the show, but decided not to show. Gee, I wonder why?

All I can say to Joe, wherever he is out there, is,...if men would start to come forward and fight back against the sexism of the likes of Suze Orman and your wife Andrea, then maybe women would stop shaming their men in public. Fight fire with fire. Until then, expect the media to treat men like dirt, and humiliate them, because, well, they can."