Well, now we've got a dead nine month-old baby girl who was being treated by (you guessed it) a homeopath for chronic eczema. But there's a twist here:

The "doctor" was her own father.

Wonderful, huh? It (almost) makes my own tale of horror seem pale by comparison. Almost.

Because "the dead tell no tales", that makes my mother-in-law (who, apparently, doesn't count - because I'm divorced) a father, a sister, a baby - plus the countless outright lies, scams, and near misses - just in the short time I've been aware of the term "homeopathy". Yea, that's some "vital force" it's got.

But, then, maybe I'm obsessively over-reacting. Or so I am told. I mean, what's a little girl's death between me and my friends,....right? And who needs my "mean" facts - like people being murdered - when you've got bright and shiny testimonials like this to counter with: 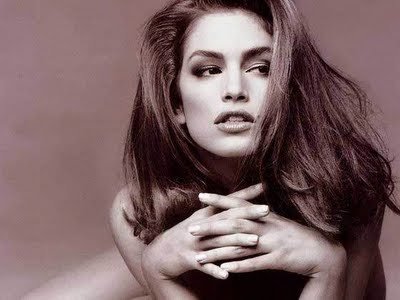 "NEW YORK, Nov. 1 /PRNewswire/ -- On yesterday's Oprah, themed "What the Stylemakers Can't Live Without," super-model and super-mom Cindy Crawford revealed that homeopathic medicine is a must-have in her life.

"So I am the doctor of our family and I'm a big fan of homeopathy," she said. "If I have the kids, for sure I always take this with me," she explained, holding up a plastic kit containing small vials of homeopathic medicines. Cindy carries these medicines in case of bee stings, mosquito bites, and bruises. "You need like 5 of those little pellets. They taste sweet so the kids will take them.""

Whoo-hoo! Sign me up! "They taste sweet"? Must be some powerful medicine "Dr." Crawford (above) has got there! That's right up there with the endorsement I told you about from the Contra Costa Times. They were recommending homeopathy for children, too, remember?

But who am I to question anything? A dumb descendent of ex-slaves? I mean - hey! - if Oprah's involved, it must be good, right?

That bitch can do no wrong.

Over at Orac's blog, Respectful Insolence, someone named "Bruno" left this comment:

"First, it's the first time I comment here so please forgive me if everything is not done in the rule. (also english is not my mothertongue :-))

So to the point, I just want to share something that may become as tragic in my family, my sister-in-law has just been diagnosed with Crohn's disease after finally have gone to a real doctor instead of her usual homeopath.

After the diagnosis, the doctor prescribed her some medication to "control" the disease and then she gets back to her homeopath who told her to throw it away as "it is bad".

The only positive point about this story, is that my wife who were trying for a long time to use homeopathy for our children (because everybody tell her it "works" and because it's not "harmful") as finally understood one of the reason I'm against it ..."

"Better late than never", I guess. Good for Bruno and his wife. (Now if only more people could catch on,...like, especially, newspapers,....) Also, Orac's comment that "the baby almost certainly suffered far more than she should have." reminds me of my mother-in-law: I didn't particularly like the racist old crow but I did respect her. She suffered, greatly, under Robert Wohlfahrt's homeopathic "care" and, most certainly, deserved better:

It's all gonna come out one day.