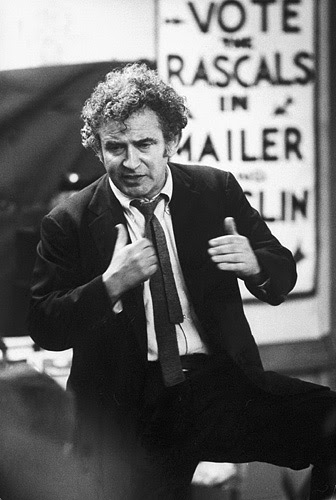 "I shared with [Ernest Hemingway] the notion, arrived at slowly in my case, that even if one dulled one's talent in the punishment of becoming a man, it was more important to be a man than a very good writer, that probably I could not become a very good writer unless I learned first how to keep my nerve."

- "Norman Mailer, the pugnacious two-time Pulitzer Prize winner who jabbed and bobbed his way, sometimes literally, through an extraordinary career as one of the most original and audacious voices in postwar American letters, died today. He was 84." (L.A. Times)

I loved The Executioner's Song and the fact Norman Mailer wasn't afraid to look like a buffoon. (Something I know a thing or two about.) Head-butting Gore Vidal was a freebie. I don't know what to make of him stabbing his wife, except to say, "Marriage is tough".

To me, Norman Mailer "made his mark", and I think we're all better for it.

He will be missed by everyone but feminists.