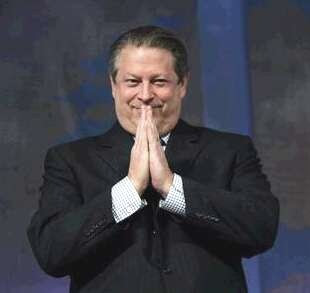 "He seems to think he is the spokesman for the human species, the legitimate representative of every human being who has ever lived or who will ever live in the future. He thinks he and his supporters ‘control the destiny of all generations to come’, a boast that even the worst dictators in history never dared to make. Al Gore is an enviro-tyrant with delusions of global domination.

For the past seven years, Gore and his supporters have claimed that he was robbed of presidential victory by the conniving Bush regime. Gore has posed as a sincere democrat whose place in the White House was stolen from him by Dubya. Yet today, Gore claims to speak for future generations (who cannot vote, on account of the fact that they aren’t born yet), the planet (which has no vote, on account of the fact that it is not a sentient or rational organism), and the human species itself (a natural/biological category that falls outside of the political process). And he is cheered by the very same people who wept when Bush allegedly stole his election. It seems that when it comes to ‘saving the planet’, you can be as undemocratic and dictatorial as you like."

No one that reads this blog can be surprised by O’Neill's piece. I think I've posted enough about Al Gore, and the environmental movement, to suggest they don't have our best interests at heart. It's still shocking to watch fascism play out, unfolding with it's own far away logic, just like the story lines I used to follow in old black-and-white WWII documentaries. I couldn't understand how such nonsense happened then ("Were Hitler's followers just stupid?") and find it just as unimaginable as I watch it happen in exactly the same way now. ("Do people actually believe they're 'Saving The Planet'?") Silly humans. Silly me.

And look at their self-appointed leader!!! Am I the only person who ever looked at old Nazi films and wondered how Adolph's genetically crippled conspiracy of losers ever got anyone to follow them? (And, at this megalomaniac stage in his career, is it unfair to wonder if Al Gore and Hermann Göring are somehow related?) The use of mysticism is the only possible explanation for most otherwise normal people overlooking physical flaws that/this obvious.

I'm not saying you got to be pretty to lead but, really, the only thing I'm trusting Al Gore for is his recall of good fried chicken joints in Tennessee.