Stop Playing Charades And Rush To The Answer 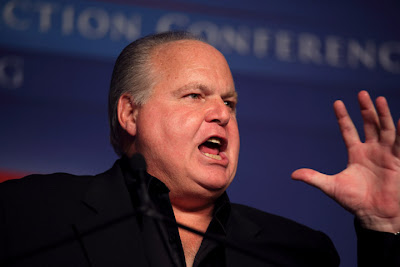 "All he has to do is show a birth certificate."

-- Rush Limbaugh - cutting to the chase of the "Birther" controversy - on World Net Daily.

Look, I've been reluctant to get involved in this - I think I've run one post on the subject and I can't even find it: And, yea, I'm still looking - and everybody knows I like Rush even though he was a main offender in the Zicam scandal (something I think he should've known better than to be involved in) but the reason I still like Rush is because of clear-headed observations like this:

It's been over a year since this started and all we hear about is reports of his birth from newspapers - which can be faked - jokes from The Daily Show, and anything else the so-called "smart" folks think can replace that one piece of paper every American citizen possesses. How all the people accusing "Birthers" of a conspiracy theory can continually miss this simple fact - even 6 months after the guy's been elected - is a wonder. But, hell, this is happening in the same country that lets anything labeled "Homeopathic" be sold without checking it - and where even big shot politicians believe in the crap, and are working - with our money - to make that situation worse, as well.

Obviously somebody's missing something - like a few sandwiches at the picnic.

Sincerely, this is not my issue, but, it seems to me, the way to a resolution is clear and simple - in plain language:

UPDATE: The National Review says they've seen Barack Obama's birth certificate at Factcheck.org - which I don't doubt, though they don't provide a link or a photo (I'll get there: busy day) - which all cuts back to the main issue:

Parading it before the American people.

Why is that so friggin' hard to do? And BTW, this should be a wake-up call to President Obama, the Democrats, and the media, about how trusted they are out there - they ain't - and more and more people are starting to make that fact very, very clear,...if you ask me, the "craziest" folks are the people who are ignoring that message.

UPDATE II: Now Little Green Footballs' Charles Johnson says, "The director of the Hawaii Department of Health, Dr. Chiyome Fukino, has issued a second statement that she has personally seen Barack Obama’s original birth certificate from 1961 in the state’s archives" like that makes any difference at all. Look, Chuck, babe:

If you asked to see my birth certificate, guess what I'd do? I'd show it to you! I wouldn't start a parade line of people telling you they've seen it - and then call anyone who doubted I had one crazy - I'd just whip it out and say "There."