Lame (Or Why "Crazy" Was Such A Hot Song) 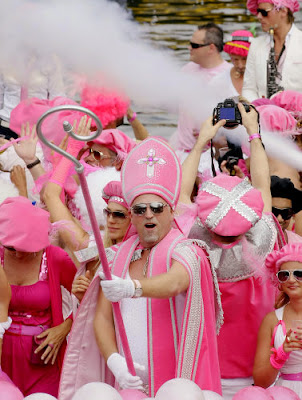 "As a test of the state of 'Bush the Nazi' rhetoric, I went to Google and typed in 'Bush is a Nazi' and got 420,000 hits, well behind 'Hitler was a Nazi' (654,000 hits), but then Hitler WAS a Nazi and had a 75-year head start. (Computer searches like this are very crude instruments. They sweep up many references that cannot fairly be listed as slurs. But they do offer a rough idea of the amount of name-calling.)

President Clinton did fairly well in the Nazi sweepstakes (158,000 hits, but that's only 20,000 references for each presidential year, compared to 120,000 annually for the 3 1/2 year-incumbency of George Bush.) The odd thing is that I typed in the names of every Nazi I ever heard of, excluding only Hitler himself, and the group total was still less than George Bush gets alone. This might indicate that either that George Bush is by far the second most important Nazi of all time, or that the Democrats and the left now require some sedation."

-- John Leo, on the sickness of mass delusion - that will forever pass for normalcy, or effective thinking, or even humor - in Leftist circles, as revealed by the Sun Journal.