Marching Into Oblivion (Finding Nothing There) 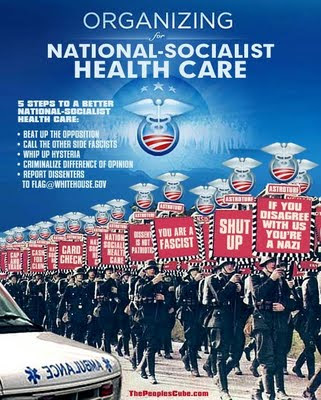 "Liberals and, shamefully, liberal oriented media — most of them — made the mistake they keep making about Sarah Palin: because she didn’t go to Princeton she’s incapable of seeing or cutting to the heart of the matter so shrewdly. They had a chance to respond as [Joe Conason] did: put her on the spot by asking her exactly what she’d do about existing insurance company 'death panels.' Instead, they didn’t believe she was sophisticated enough (like them) to make the point she was making.

And then the facts began to leak out, as even the media began to read the bill and its implications and backtrack on its deeply flawed literal-to-the point of stupidity 'fact checks'– and people got legitimately outraged at being treated like Sarah Palin: too dumb to understand. When in fact they — the liberals and the media — were the ones whose knee jerk reactions were ignorant.

Of course the overreaction by genuinely ignorant right-wingers ('I don’t want the government to mess with my Medicare') and the thuggish, lynch mob behavior at town halls (boasting of shouting others’ down and other mob tactics, Hitler mustaches etc., rather than making rational arguments and respecting other citizens) including the terrorist tactic of bringing guns to town hall meetings, showed that the right could squander an advantage in legitimate debate by making an ugly spectacle of itself.

Nonetheless, when the history of the whole misbegotten health care reform effort is written, Sarah Palin has to be given credit for stopping it on a dime — and the snotty liberals who underestimated her should be held responsible."

-- Ron Rosenbaum, making a distinction between "Dumb and Dumber" - and finding the condescension of his fellow libs makes them the reeelly stupid ones - since exposing who's asleep-at-the-wheel is the job of Pajamas Media.