Once Again: It's All Part Of A Whole, People! 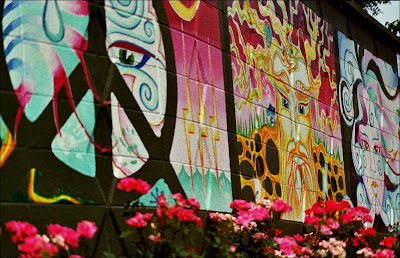 The Arabs invented the printing press, and spurred us on to the Enlightenment and Renaissance. Muslims in Cordoba advised the brutal Christians to show tolerance during the Inquisition. Slavery ended in America without violence. The Berlin Airlift was a worldwide effort. The Americans liberated Auschwitz. There are 57 states. FDR was President in 1929 and gave television addresses. We can either drill offshore or inflate our tires properly.

There are no terrorists or a war on same, but only overseas contingency operations and man-made catastrophes. Those who object to health care are ungodly, and the nation’s children must go to school and see the messiah address them en masse on state-run television screens. Nazis, brown shirts, a mob, insurance lackeys, Brooks brothers elites, etc. all go to Town Halls. Doctors chop off limbs and gleefully take out tonsils for profit. George Bush is our Emmanuel Goldstein whom we must hate collectively each morning for a couple of minutes.

Our environmentally-correct czar believes that we were behind 9/11, that whites pollute poor neighborhoods on purpose, that American agriculture is pathological, that Republicans are 'assholes' and so on. He is the ideological version of the buffoonish Robert Gibbs. What do they teach at Yale (and Harvard) law school? Is admission there synonymous with graduation?

The new Supreme Court Justice thinks that some judges are better than others based on their gender and race.  The Attorney General (we are 'cowards' afraid to talk about race) wants to try agents of the CIA, not hunt down terrorists that plotted to destroy America. No wonder, in a past incarnation he helped to pardon terrorists from Puerto Rico for similarly careerist purposes.

In short, we are now in theory to be governed by enlightened despots and philosopher kings who have never run a business, never understood private enterprise, and never been off the government payroll, but always hypercritical of their opposites. We have suddenly dozens of czars—how better to avoid Senate confirmation? To sidestep existing checks and balances? To substitute administrative fiat for majority- vote ratifications? To enact hope and change without messy Town Hall-like recriminations against elected officials?

Given all this, an unhinged activist like a Van Jones is not the exception, but emblematic of the new frontier. All the old wisdom, the old reverence are going by the wayside, replaced by a brave new world in which we will be the same in spirit and outlook, committed to replace truth with orthodoxy, roughly equal in ability, neither successful nor failures, neither rich nor poor, nothing 'exceptional' at all, mere happy cogs in the brotherly redistributive wheel—mouthing platitudes about diversity and being green, clueless as to their meaning, but clued in to the necessity of chanting such mantras.

And given the President’s rhetoric, and the media as our new ministry of truth— we will be more or less happy idiots,...."

-- Victor Davis Hanson, not sure if the current administration was ripped straight from Whole Foods or Burning Man - I'd suggest both - but noticing, wherever they came from, they're not needed at Pajamas Media.