DEVO-LUTION: A Life In Music Is Funny (Mine Is Anyway)

There was once this band out of Akron, Ohio, who found they wanted to change their sound.

And - while in Los Angeles - they heard that new sound in a kid visiting from Minneapolis, Minnesota.
The band went on to write their biggest hit.

But their record company couldn't hear "Whip It" immediately - they rallied around a song called "Girl U Want" and pushed it HARD - but it still flopped. And they blamed the band. 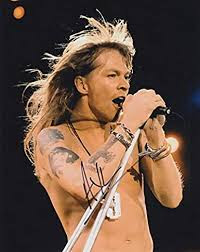 Why am I telling you this? Because I was born and raised in Los Angeles, and just happened to work for a radio station.

While there, I also heard someone from Minneapolis, Minnesota who inspired me to explore music further.

And, once I did, wouldn't you know comparisons started being made to Axl Rose?
I just want to tell DEVO to blame their record company: despite the fans loving it, using "Girl U Want" as the middle eighth to one of my songs didn't do shit for my career, either.