Boy, Barack Sure Is Curing Race As An Issue!! 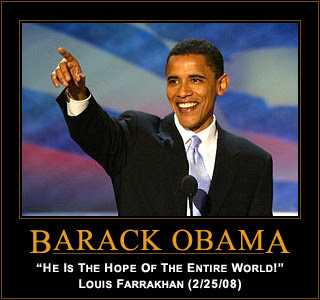 "There's only one thing different about Barack Obama when it comes to being a Democratic presidential candidate. He's half African-American," Nader said. "Whether that will make any difference, I don't know. I haven't heard him have a strong crackdown on economic exploitation in the ghettos. Payday loans, predatory lending, asbestos, lead. What's keeping him from doing that? Is it because he wants to talk white? He doesn't want to appear like Jesse Jackson? We'll see all that play out in the next few months and if he gets elected afterwards."

The Obama campaign had only a brief response, calling the remarks disappointing.

Asked to clarify whether he thought Obama does try to "talk white," Nader said: "Of course.

"I mean, first of all, the number one thing that a black American politician aspiring to the presidency should be is to candidly describe the plight of the poor, especially in the inner cities and the rural areas, and have a very detailed platform about how the poor is going to be defended by the law, is going to be protected by the law, and is going to be liberated by the law," Nader said. "Haven't heard a thing."