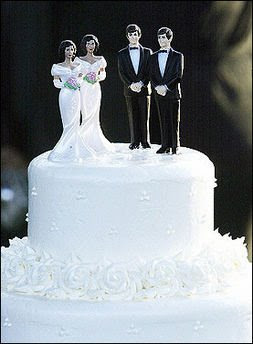 Well now, isn't that special: the San Francisco Chronicle has waited one day before California starts marrying gays to tell us that

"For much of the gay and lesbian rights movement's history, activists saw marriage as an institution to be dismantled."

I could have sworn that gays - and the Chron - have always said they weren't doing that. No "gay agenda," remember? They never encouraged wives to leave their husbands, or any of that stuff, right? They didn't contribute to the rise in the divorce rate - the same one they point to, now, saying gay marriage couldn't hurt the institution of marriage with a divorce rate this high? No, they - and their Lefty/NewAge promoting media outlets - wouldn't have all lied to us, repeatedly, just to suit themselves - and whatever is was they believed at the time, would they?

And then they have the nerve to complain that many straights, and those who are devoutly religious, don't seem to like them.