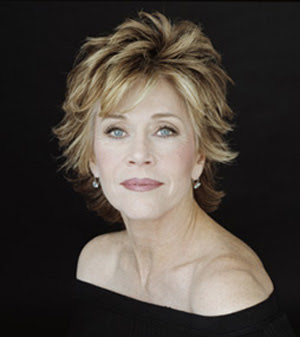 "[Jane] Fonda was delivering remarks to close out the 'Superlove' portion of 'V to the Tenth,' [Eve] Ensler's two-day birthday party for her vagina-loving organization, V-Day, and for the play that started it all, 'The Vagina Monologues.' Fonda -- who had drummed up publicity for this event back in February by uttering the word 'cunt' on morning television -- began her speech with some copious crying. 'I am so proud to be a woman!' she'd said, sniffing mightily as she took the stage. It ended with some Eckhart Tolle-influenced wavy-gravy about how we're all fields of energy. 'This is not just new-age hogwash,' she said, 'It is actually how reality works.' (Um, no, not really. But she's Jane Fonda, so that's OK!)"

-- Rebecca Traister, writing for (what else?) Salon.com

Wow. Swearing on television; crying over stupid identity politics; new age nonsense; and bogus science - all in one person. Plus she's most famous for collaborating with the enemy in a war. Yea, that Jane Fonda is some feminist leader you ladies have. And you diss me for bagging on feminists and feminism? Please. Blame yourselves:

As a real feminist, I can't stand it.
Posted by The Crack Emcee at 1:17 PM