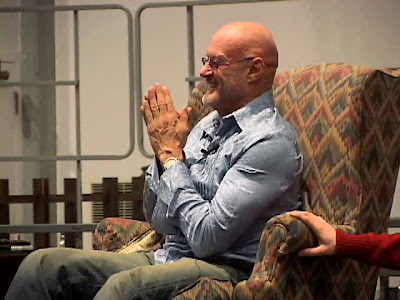 "[Ken] Wilber has a passionate -- almost cultlike -- following in certain circles, as well as some famous fans. Bill Clinton and Al Gore have praised Wilber's books. Deepak Chopra calls him "one of the most important pioneers in the field of consciousness." And the Wachowski Brothers asked Wilber, along with Cornel West, to record the commentary for the DVDs of their 'Matrix' movies."

-- Steve Paulson, once again dropping the "c-word" (which so many want to deny, as it keeps popping up in article after article) while writing for Salon.com

Look at those names: the adulterer and serial liar; the baseless Global Warming fearmonger; the guy who tried to scam the Journal of American Medicine; the brothers who convinced a bunch of lamers this reality isn't real, and a "race man" who not only makes no sense but - and this is his larger crime to me - made a bad rap album.

What an example that collection sets, huh? Just the idea that someone could look at that list of names, knowing what impoverished roles these people are playing in our lives, and not call "bullshit" on Ken Wilber, should tell you all you need about what's wrong with the West today. All major players, all proven douchebags on the public stage, and all "followers" of Ken Wilber. I ask you: who's running the show here? These so-called "leaders" or the bald-headed asshole they all suck up to?

What is it about people that makes them vulnerable to cultism? I was reading about James Taylor's hit "You've Got A Friend" the other day - that line "they'll take your soul if you let them" got my attention - only to discover it was written by Carole King as a sop to Sri Swami Satchidananda, author of yet another book on Yoga. It never ends with these people. There's no escaping it. The Boomers can't die fast enough to give the rest of us air. Is it any wonder why people go on rampages when there's so much deception being pulled on them? Not in Washington, D.C., but right on their fucking radio?

Scientologists in PBS. All the Leftists "educated" by Werner Erhard's destructive est - which is a Scientology offshoot that's now sold as the Landmark Forum. With the Beatles' help, even more followers of the Maharishi, and, now, Oprah Winfrey and Ekhart Tolle, and on and on and on. Is it no wonder so many people don't understand what good there is in being a plain ol' patriotic American anymore? Why this country's "stand on your own two feet" idea is alien to so many? We're talking generations of "followers" here, destroying individuals, and families - and the national fabric - with their impulsive "be here now" live-for-the-moment "teachings" that lead to "feelings" that unleash all manner of mystic mayhem, in the personal, public, and political worlds of others. The idea of leaving others alone is so alien to these fundamentalists they don't know how to hold a decent conversation otherwise. Tell them to stop, stand up like an adult, and they don't listen anymore. As a matter of fact, the act of not thinking makes them feel superior. It's like high school on steroids - or the worst drugs you ever had - when you knew the "cool kids" were assholes. 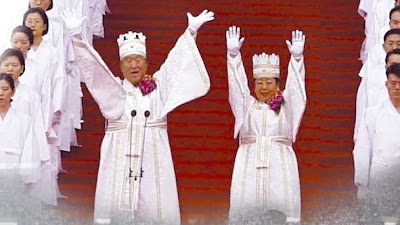 These "followers" are people who won't grow up enough to shake off the shackles in their minds. To be "real" men and women - not childlike "followers". Always on the prowl to rope others into another kooky idea that's supposed to bring happiness but, after all these years, has done nothing but bring life in America low; started another generation to follow. Like the proverbial company man who's working against the organization, there's just nothing worse. 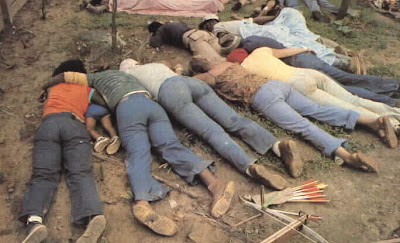 I hate this. Yes, "hate". If you had told me, when I was a child, that when I grew up I'd be surrounded by so many people who lacked independence of thought - and who, despite all the evidence cultism is extremely bad for human beings, will ignore all that for their own personal fulfillment - I'd have never believed you. Adults, by now, were supposed to be brighter than this. But not these adults. They know less about themselves than anything else - and will admit it when pressed. My hearing "Oh, I don't know" is now a cliche' of my waking life - always said by some formally passionate idiot who, apparently, no one else has ever questioned deeply about what they believe. They just don't know what they believe. And they won't try thinking.

But God damn it, whatever they're doing - good or bad or happy or scam - they're sure gonna pass it on.