Note to Billy Joel: “We Didn’t Start The Fire” But We Keep Pouring Gasoline On It 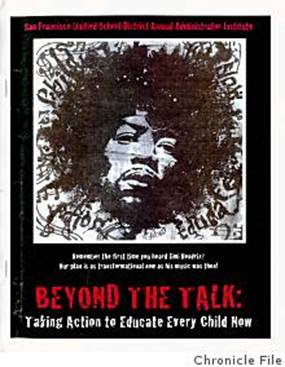 Context matters, and the San Francisco school district has taken both Jimi Hendrix and the public schools way out of context.

There was a time when teachers would freak at the sound of Jimi Hendrix's "Purple Haze" or "Stone Free." Now the San Francisco school district wants them to get in the spirit.

"Remember the first time you heard Jimi Hendrix?" reads the cover of the district's new 51-page education guide. "Our plan is as transformational now as his music was then!"

The manifesto is aimed at transforming the educational "experiences for every child in each of our schools."

To drive home the point, a portrait of the '60s rocker - looking somewhat pensive, somber and perhaps stoned - graces the cover and every page of the manual.

The book also comes with a Hendrix poster and Hendrix-emblazoned canvas bag, which were handed out to a couple hundred administrators at Superintendent Carlos Garcia's back-to-school confab in September.

Not everyone, however, is in tune with the campaign, given that the songwriter-guitarist died after overdosing on prescription drugs and alcohol at the age of 27.

One school district employee, who asked not to be identified for fear of retaliation - but who described himself as a "liberal hippie educator who experienced the Summer of Love in San Francisco" - said he was disturbed that the Hendrix poster is popping up on school campuses.

"I find the choice of Hendrix as an inspiration to be used in an educational setting rather strange and out of touch," he told us in an e-mail.

As for Hendrix's druggie image?

It’s past time to permanently fence off San Francisco. Fifty feet high, high voltage electrified. Nobody in, nobody out.