And A Crazy Black Man Shall Lead Them,... 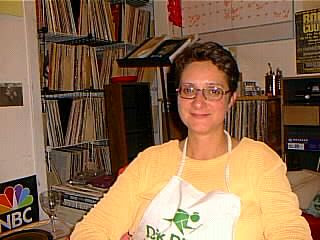 A while back, I mentioned that I had garnered a bad reputation on some science/medical sites because I thought they weren't aggressive enough on new age beliefs. They called me crazy, etc., when I reminded them of the words of my ex, Karine Brunck, (above) after she fell under the spell of Robert Wohlfahrt, a german homeopathic doctor:

"We're in the hospitals - we're getting legit - you'd better 'get it' before it's too late!"

Well, now they're finding out what she meant - and they're getting scared. Check out two recent events:

A bit of "homeopathic thuggery" hit an anti-woo site, Quackometer, and got it to remove a criticism of the Society of Homeopaths, prompting a bunch of sites to post copies of the criticism in retaliation (I'll be joining them, shortly, though I think this act of civil disobedience is a typically lame response to a crisis of this magnitude.). Needless to say, I saw this coming.

Now, Orac - one of the biggest bloggers in medicine online (and someone who gave me shit for my methods) has written this:

"I'm beginning to wonder if I should just give up this quixotic battle to try to insist on evidence-based medicine in academic medical centers. I'm clearly losing the battle, and sooner or later I'll be relegated to the sidelines along with the other dinosaurs who advocate scientific medicine over unproven, non-evidence-based therapies. If I were to join the Dark Side, I could probably attract a bunch of grants to fund clinical trials to look at whatever the woo du jour is. I'd never do that, of course, if only because as a former skeptic I'd represent a truly valuable scalp for the world of non-evidence-based medicine, but I feel as though I'm increasingly alone in holding out."

Like I've said, these scientist-types (who all seem to be somewhat leftist) don't seem too bright when it comes to war. It was fine when my life was destroyed by this (I was crazy, remember? Nevermind my mother-in-law's death, or the facts of my divorce, or anything like that) but, now, the doctor's are voicing despair - and showing an unsettling willingness to throw in the towel - when the nonsense I told them was coming is actually rolling up on their front doorstep.

Luckily - for all of us - Dr. R. W. Donnell is joining Orac in another battle - against Reiki (another of my ex's obsessions) that's now being used in the University of Maryland’s Shock Trauma program. Will any other doctors and scientists join them? Will the science and medical field finally start taking these "flakey" ideas seriously (check out that last link - it's a doozy) - and start really fighting - or will they leave me out here, by myself, as they try to "reason" their way forward against people who could give a damn about reason?

Now who's with me?