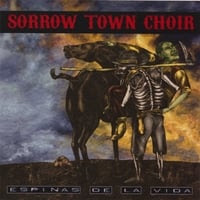 My pal, Greg Dale (of the Sorrow Town Choir, latest CD above), recently said to me:

"You're like a fly on shit for this Occult stuff, and, this morning, I turned on the radio and the first thing I heard was the word 'Occult'. I never heard that on the radio before - it's weird."

Which is cool because it proves that, once you know about this shit, you start to see how pervasive it is. I was reading an article about Oakland, California's Glynn Washington (a possible new NPR storyteller, seen below) and it just popped out of his life story like this:

"A few years after moving to the country, radio transformed his family. His mother fell under the spell of an on-air evangelist, and she dragged the entire household into a group he described as an apocalyptic cult."

I guess, in time, it'll be part of my biography too:

I'm just gratified when I hear people finally noticing what I'm saying, or asking questions about it. Like when another friend (female type) was talking to me about her funky feelings one day, and said, "I don't know, maybe Saturn is in retrograde or something,..." Then, remembering who she was talking to, followed that with, "Or whatever those rich idiots in the hills believe." Now that was extra special, because women cling to cult shit like cashmere on sale, so I considered that a major victory, for rational thought, or something.

I went to a party recently (Yes, I got out of the house, finally, and away from the computer) and was even asked to explain the difference between 'closed' cults (single leader, creepy beliefs, nobody leaves - ever) and 'open' cults (maybe several leaders, creepy beliefs, people come and go with their creepy beliefs always in tow) and, then, all the different types of cults (political cults, medical cults, religious, spiritual, etc.) and was amazed to see how little people actually knew of this shit. Once they realize I'm normal (because the blog can make one think otherwise) it's really wonderful how people open up with all their questions, and tales of crazy friends and family, regarding how this crap destroys things.

Speaking of noticing things, the San Francisco Bay Guardian's Dennis Harvey did a great review of the brilliantly-titled movie, How To Cook Your Life (poster below) a documentary about a Buddhist chef. Here's the capsule review: 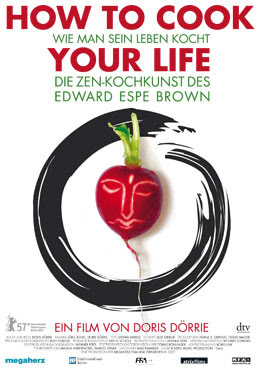 "Her interest in Zen Buddhism already demonstrated by 2000's hit comedy Enlightenment Guaranteed, German director Doris Dörrie returns to the subject with a characteristic light touch in this documentary. It's a portrait of Edward Espe Brown, longtime tenzo (chief cook) at Tassajara Zen Mountain Center near Carmel. Following the teachings of 13th-century Master Dogen and those of Suzuki Roshi (seen lecturing in archival clips), Brown applies Zen principles of mindfulness and appreciation to everything from cutting carrots to making elaborate baked desserts. As he admits, though, he's not always the essence of serenity — Dörrie's camera catches more than a few cranky moods when he loses patience with the novice cooks who've paid for a course of culinary and meditation instruction. Larger questions of a "you are what you eat" nature are addressed in Bay Area–centric glimpses of fast food restaurants, the homeless scrounging for sustenance, organic farming operations, and so forth.

In typical Dörrie fashion, the film is wry, ingratiating, and ultimately ambitious in ways too low-key to announce themselves. However, viewers are advised to bring along at least a casual interest in Zen philosophy — the unsympathetic may find themselves rolling their eyes at the seemingly flat simplicity ("When you wash the rice, wash the rice") of the many wisdoms offered here."

So this asshole chef "applies Zen principles of mindfulness and appreciation to everything from cutting carrots to making elaborate baked desserts" but, when it comes to people, "he loses patience with the novice cooks who've paid for a course of culinary and meditation instruction." Great - where do I sign up to be abused worse than a fucking chopped carrot? And we're advised to "bring along at least a casual interest in Zen philosophy" (translation: be a budding cultist) to enjoy this lame-brain's "wisdom" - such as "When you wash the rice, wash the rice" - because, otherwise, it'll actually be revealed as the simple-minded bullshit it is.

I swear, I can't make this shit up.

Like this on-going story about psychic-friendly Ellen DeGeneres (above) and that dog, "Iggy". It seems this mother-of-the-universe has ditched dogs before. The woman who tells us about it, film producer Kerri Randles, says Ellen is "neurotic and crazy" and wanted Miss Randles to "tell the dog privately that she'd be going home with Ellen."

Well, if she's talking to psychics - while admonishing people on how to save the planet - talking to dogs ain't gonna come as a surprise:

Occultists are whacked in the head, Kids, and never live as they claim. 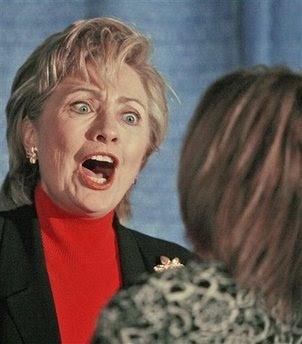 Check out this bit, about (who else?) Hillary Clinton, that's (strangely) been left out of the online version of a Wall Street Journal review of books on the Clintons:

"As in earlier books, Hillary Clinton is reported to suffer Bill's infidelity for years and takes the lead, privately and publicly, in defending him and tearing down accusers. In Ms. Smith's account, both Clintons repeatedly dissemble or withhold information from their political, legal and media interrogators when forthrightness and honesty might limit the damage."

Whoo-hoo! They've got my vote! Along with the psychics, the channelling the dead stuff, the cult of Ken Wilber, working with Tony Robbins, the bio-electric shields to ward off "negative energy", the criminals that keep popping up to be hired as "consultants", and everything else - well, America can't do any better than New Age-y Bill & Hill, can they? Shit:

How can any of us ever get along without more of that?