While looking for Rielle Hunter's denial - she's the woman John Edwards is supposed to be sleeping with - I found it, with a mention on Slate.com that "noted astrologer Jerome Armstrong" had it. Who is Jerome Armstrong? I didn't know either. He runs something called My Direct Democracy, that I also didn't know about. He seems to be a part of The Daily Kos crew. (That's Markos, above - the Daily Kos founder) Then I found something called the Riehl World View that said this - and read all of it:

"The genesis for the Netroots movement stems from a fixation on, first the stockmarket, then astrology, and it only found politics, probably, when it was barred from engaging in a previous financial fascination that ultimately led to real trouble with the SEC. Just read this quote from the new wizard, who some think is pre-destined to lead the Democrats to the promised land.

Stuart Riddle says: As Saturn turns direct, I'm reminded of the significance of Saturn in Gemini for the United States. Louise McWhirter wrote about this in her seminal text, Astrology and Stock Market Forcasting (New York: AFI Publishers, 1977; originally published in 1938). She confirmed the potential for conflict in the form of domestic and foreign wars during this transit: "Saturn has never passed through Gemini during the past 72 years without bringing a financial depression, financial panic, or war" (p. 92). *TMA Editors note: The last two Saturn-in-gemini periods coincided with the Vietnam War (1971-73) and World War II (1942-44). Saturn visits Gemini again from April 20th, 2001 - June 2003 (It also made a breif(sic) station from Aug 11th - Sept 16th in 2000, foreshadowing the bulk of the transit to come).

Now, today, this is the Netroots, as it's called, from an article today at the new Democratic Strategist. 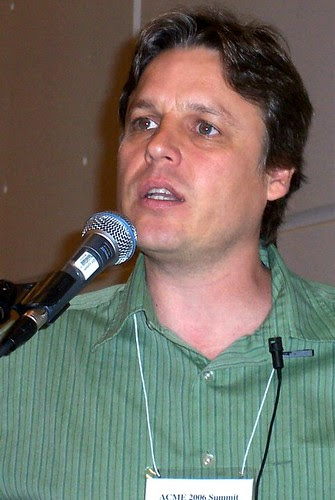 By Jerome Armstrong (above)

Ten years from now, the Democratic Party will have fully broadened its election strategy beyond the battleground mentality that dominates strategic thinking today. Democrats will be a national party, leaving no uncontested race anywhere in the nation, and will have rebuilt a party infrastructure down to the precinct everywhere in the nation. The Democrats will have regained their majority status as the governing party, and the mapchanger approach to elections will have been the reason.

Yet, not so long ago, he was called the Astrologer Jerome by some.

Astrologer Jerome Armstrong notes that Ixion and Quaoar are following close in Pluto's wake in early Sagittarius, and connects the rise of the political version of religious fundamentalism with the astronomical exploration of the Kuiper Belt in 1992. He cites incidences as disparate as the rise of Osama bin Laden onto the world stage and the Republican Revolution of 1994, fueled by Christian fundamentalist voters and culminating now with all three branches of government in Republican control. In addition, he cites the ascendance of political Hinduism in India in 1996 with the election of the BJP. One might add to this list the emergence of Conservative majorities in Israel and the UK. [The author wishes to acknowledge the help and inspiration provided by astrologer and author Jerome Armstrong of AstroWorld.mydd.com for information and links regarding Varuna and Trans-Neptunians which have been vital to the preparation of this article.]

MyDD didn't have anything to do with democracy, direct, personal, or otherwise when it started out as an astrological tabloid, forcasting the ups and downs of the stock market based upon the stars."

Now - looking at this with everything else we've looked at - are we looking at a New Age Democratic Cult or aren't we?

Don't forget to look at the tags for forward forward to my latest posts - and Barack Obama for the whole, updated, story.