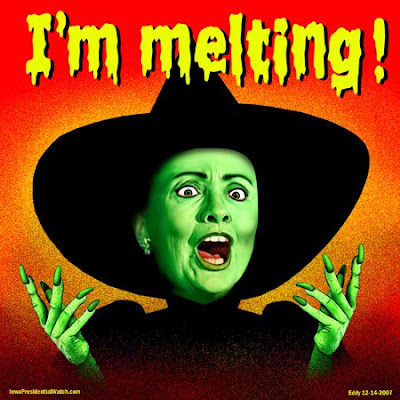 "Mrs. Clinton is the tea bag that brings the boiling water with her. It's always high drama with her, always a cauldron--secret Web sites put up by unnamed operatives smearing Barack Obama in the tones of Tokyo Rose, Chinese businessmen having breakdowns on trains after the campaign cash is traced back, secret deals. It's always flying monkeys. One always wants to ask: Why? What is this?"

- Peggy Noonan, the very-perceptive columnist for the Wall Street Journal

"Flying monkeys". Nice choice of words for the Clinton many consider The Wicked Witch of the West, no?

Speaking of seeing weird things around presidential candidates, according to recent reports on a new Shirley MacLaine book, Dennis Kucinich (above) saw a U.F.O. while at MacLaine's house. (Hardly surprising for the likes of him, seeing how he's always making such a big deal of his goofily-bad poetry writing, and the insistence he's so "different".) So - if I've got this right - Kucinich sees U.F.O.s, and Hillary Clinton talks to the dead, amongst other things. And both are, still, considered presidential enough to be regularly invited to debates. Oh-K. 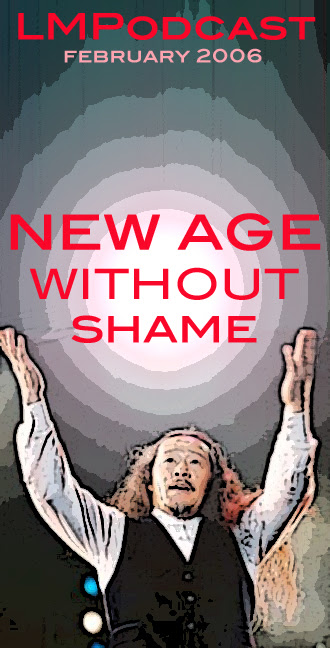 I'm just asking but, has anybody noticed, this kind of stuff doesn't pop up on the radar of the other presidential candidates? I mean, sure, they say John Edwards was boinking a New Ager, but nobody ever said he was one - not even me - since I'm only trying to tell you about confirmed fruitcakes. What's up with that?

As far as I know, comparatively few Republican candidates have been found to be part of the New Age - except for, maybe, unknowingly taking cult money. Any quick look around the blog will show I've had reason to talk, almost exclusively, about Democrats in the pocket of one group of cultists or another. Not because I hate Dems but (surprise!) that's who is, almost exclusively, into cults and cultish thinking. Maybe Republicans are just too tied to the concept of "individual freedom" to let any kind of guru lead them around by the nose for too long?

Hillary, especially, has a long list of New Age stuff in her history while claiming she's merely a Methodist Christian (Notice that none of these so-called "brave" folks can handle being an atheist?) but did you know Arianna Huffington (above, of the politically influential Left-wing Huffington Post blog) is also a follower - of the cult leader John-Roger? I didn't, until the stuff about the Daily Kos and astrology came out, which gave me a reason to start rooting around in the "netroots" phenomena.

Really: So much of the in-house anti-America rhetoric is coming from cult sources, it's truly amazing - makes one wonder what else they're lying about, doesn't it? It does for me because, seriously, I can't seem to find any escape from it.

These days, in what Frank Furedi calls The Age of Unreason, I see tons of opinions being treated as facts by the Left, and just as many facts being disregarded as opinions merely because they come from the Right. Seriously, forget about the war for a moment, and ask yourself how much you really know about some other things the Left is pushing on us - things that you can actually nail down - that you can check for yourself? How much of it is true, and right, and really "good"?

Like, is recycling (something which everyone I know insists on) really "good for the environment"? Not according to the facts. Penn and Teller's Bullshit! even won an Emmy for showing "the reality behind recycling, a supposedly pro-environment activity that in actuality creates pollution, has to be subsidized by the government because it's cost ineffective, and is completely unnecessary."

Now, if the Left can be that far-off about good ol' recycling, as they're going out of their way to accomplish it (and fascistically demanding others follow suit) how right, or wrong, might they be about what's going on half-way around the world with our boys lives and, possibly, the fate of our nation on the line?

Admit it: Any of these serial protesters can be that exact same distance from the truth and never know it. And, all the while, screaming their heads off that the president of the United States is actually leading a nation of murderers, when it's they who may be destroying the best chance for peace and prosperity someone else may ever have, leaving only dead bodies in their wake.

I swear, once this shit is cleared up - and it will be - this blog is gonna be worth big bucks one day,...