"There's only one person who knows the truth—God."

"Marion Jones,...tarnishes more than her own reputation,...It shows the demonstrated willingness of many,...to lie through their teeth,...Many,...have turned out to operate in an ethics-free zone.""

- John Hoberman, a University of Texas professor and expert on steroids in sports 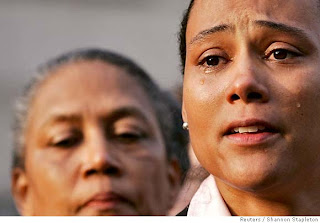 "She had to say the words 'shame' and 'betrayed' with her mother standing beside her and dozens of cameras clicking away,...the only remaining potential for disillusionment lay in Jones' chances of getting away with it all - especially the incessant, adamant lies. They were worse than the doping itself.

She practiced spin control as if it were an Olympic event, going so far as to hire Bill Clinton's post-Monica cover-up artist, Chris Lehane. Their playbook was thin: Attack your opponents, lie, lie, lie, and try to look good doing it,...she called the U.S. Anti-Doping Agency 'a kangaroo court',...and,..she illicitly missed (or skipped) a drug test 15 years ago, as a high schooler, but avoided sanctions because Johnnie Cochran stepped in as her lawyer. She was still a victim.

She had survived an avalanche of evidence. She kept issuing angry denials even after working with two coaches deeply connected to steroids; after marrying one busted doper and having a child with another; after using a lawsuit to silence [Bill] Conte, the former "nutritionist" who told the truth about her; after skating away from the BALCO files that brought down many of her colleagues; and after twice escaping from problematic drug tests.

She seemed more unbeatable in this arena than she did on the track. But in the end, she lost."

- Gwen Knapp, the excellent San Francisco Chronicle sports columnist, getting it right, once again, as always

"Her former husband, C. J. Hunter, the shot putter and fellow cheat, claimed that she injected herself with human growth hormones, while Victor Conte, the founder of the Balco drugs factory, said she used performance-enhancing drugs 'before, during and after the 2000 Olympics'.

Both are discredited figures, however, and Jones had always maintained her innocence, filing a $25 million lawsuit against Conte in 2004 for his claims that he supplied her with drugs.

Jones claimed that in 1999, [her coach] advised her to take a 'nutritional supplement' that he called flaxseed oil,...'he told me not to tell anyone about our workouts or supplementation program.' She agreed because she did not want to give her competitors any edge.

Her relationships with [her ex-husband], who was once found to have 1,000 times the normal level of nandrolone in his system, and [the father of her child], whose world 100 metres record has been expunged, invited cynicism."

- Rick Broadbent, Athletics Correspondent for the Times of London "Invited cynicism"? Well. And here I was thinking non-new agers were just being mean.

Isn't that what believers always say?
Posted by The Crack Emcee at 3:29 PM