"He's using his imprimatur of San Francisco, the mayor of San Francisco, to lend credibility to this cult. This means people may join Dahnhak when they otherwise wouldn't have,...Mayor Newsom has admitted his personal peccadilloes in the past. But actually this is much more serious."

That's a message, printed in yesterday's SF Weekly, right from the Rick A. Ross Institute on cults. Yes "cults". You know, those groups that are insidiously warping minds to the point where "only in San Francisco" is a cliche? And this, even though the most famous and dangerous cult - The People's Temple - was not only based in San Francisco, but was so popular with The City's politicians, the cult's leader, Jim Jones, was put in charge of it's Housing Authority Commission before he killed 900 followers. 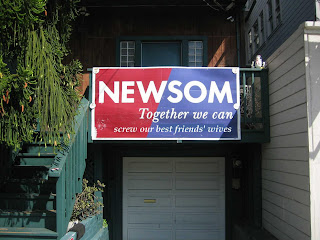 So anyway, the blatently-immoral (and apparently worthless) Mayor of San Francisco, Gavin Newsom, made September 7th "Ilchi Lee Day", in honor of the leader of the Dahnhak Yoga cult - the same cult that killed a black professor on the East Coast. And this comes after he's dated a Scientologist, ignored the pleas of citizens regarding the Falun Gong cult - even allowing them to recruit in front of City Hall - and has also allowed numerous other cults to flourish.

I've spoken before the Board of Supervisors, several times, about cultish influence in San Francisco - to yawns. Cults are everywhere in The City but - seeing how everyone's so "open-minded" - no one will identify them for what they are, claiming they're a human rights issue (Board of Supervisor Chris Daly) a free speech issue (Investigative Reporter Phil Matier) or, in the case of Yoga cults, an exercise issue (many of my, already overly-health conscious, friends - who really ought to know better). The danger cultish thinking poses, and the fraud cultish thinkers commit, has no effect in a warped-out city where many residents believe they're psychic and it's an act of bravery to say otherwise.

Well, now that it's official, and Rick Ross is involved, maybe somebody will wake up and do something before another disaster strikes. As Rick Ross says:

"I don't see anything in Newsom's recent history that suggest he'd suffer political damage from admitting he'd made a serious mistake."

And - take it from someone who's shed so many tears over this issue that he now dreads even going into The City limits - that's a crying shame.