"Of Jimmy Carter, Schlesinger says he 'could not bring myself to vote for a man who believes that Adam and Eve once existed and,...he has seen flying saucers.'" 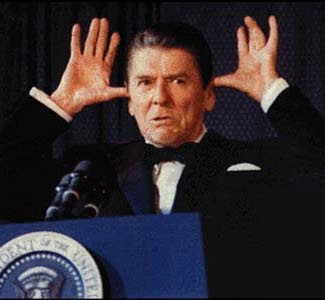 "Reagan told [Jim McCartney of Knight-Ridder] that Chernobyl had been predicted in 'the eighth chapter of Revelations.'"

"Al Gore speaks with 'a holistic, even mystical, fervor' about everything from Gnosticism to,...'a redefinition of our relationship to reality.'”

- From Maureen Dowd's review of Arthur M. Schlesinger Jr's diaries, which details many of the new age/occult/religious beliefs of the nutcases who've held power, courtesy of The New York Times.