On A Budget? Crap Your Pants And Sit In That 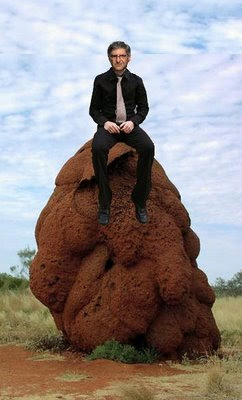 This is either proof that the art collectors are still spending, or that they have lost their minds. Maybe both. The piece in question is a chair -- resembling a turd with with tusks -- that gaveled yesterday at Christie's Paris auction for an eye-popping (pooping?) $28.3 million. The leather and wood chair that swaddled the ass of Yves Saint Laurent was among the items fetching $484 million, almost $60 million more than the estimated total sales of the "Auction of the Century," which critics said would determine the future of all art auctions.

The couple that bought the 90-year-old armchair (entitled Dragons—yes, the chair is art, it has a title) paid far more than the $3.8 million estimate. “It is the price of desire,” sniffed the buyer.

A Christie’s rep was astounded at the sale of Dragons, which was designed by Irish artiss Eileen Gray. “It was a remarkably strong piece, but what it went for was beyond our wildest imagination.” Being of Irish descent, and on behalf of the Old Sod, I
apologize for our crappy contribution to the art world. Mea maxima culpa.

Having money doesn’t mean you’re not stupid. In fact, some of the dumbest people on the planet have plenty of money. Think about Prince Charles for a moment.