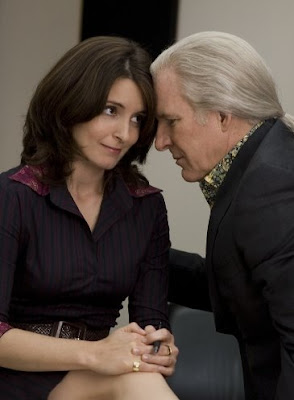 A brilliant, Crystal-worthy skit by Tina Fey and Steve Martin for the Best Original Screenplay gong, in which they riff about how every blank page starts with a dead tree, which, in turn, starts with a seed.

Martin: "And every tiny seed on earth was place here by the alien king Rondalay, to foster our titrates, and fuel our postive transfers."

Fey: "Ah, Steve, no-one wants to hear about our religion. That we made up."

A dig at Scientology in the Academy Awards? Brilliant.

Steve Martin played Tina Fey's ruthless NewAge boss in "Baby Mama" (pictured above). They tell a joke about "the world's most dangerous cult" at The Academy Awards - which they did while announcing the "Best Screenplay" award for Milk - a screenplay that painted a politician as some kind of "gay saint" by studiously leaving out any mention of his long-and-ugly associations with Jim Jones and The People's Temple cult that killed 900 (mostly black) people from the San Francisco Bay Area - and, by the way, blacks are one of the groups gays are now mad at because they didn't vote for Prop. 8.

Considering all this, we sincerely don't know how NewAgers sleep at night, with so much blood on their hands.

Actually, we do, and it's not well.