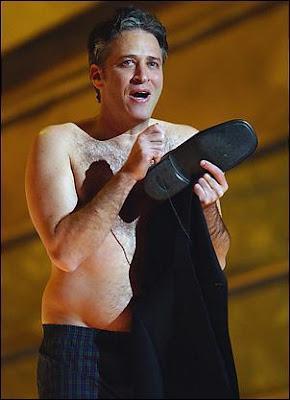 On most,...substantive issues, Stewart simply tells his core audience what they want to hear. His core audience is not the independent-minded college student that tunes in for a few laughs now and then. His core audience are liberals who stay glued to the show even when it’s not particularly funny, because they agree with what’s being said.

...Stewart’s defenders will say I’m taking this far too seriously. After all, this is a comedy show. However, to say “it’s just a comedy show” is disingenuous,...

...In truth, Stewart uses comedy to shield himself from criticism. It’s perplexing to his on-air conservative targets, who often don’t know how to respond. Stewart uses the comedy defense as if to say, “What? Are you going to hit a clown?”

Face it, people: you like the taste of lies,...