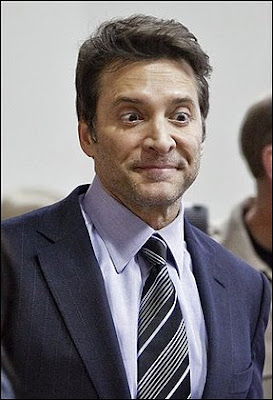 There's an Arizona Republic article, about the NewAge murder trial of James Arthur Ray, that's so good I don't know what to quote. Reading it is like getting a crash course in what this blog is all about, whether I'm discussing NewAge spirituality, NewAge in politics, "ancient teachings", or any other aspect of contemporary fraud that catches my interest.

I have pointed out before that it is in the court of law - not public opinion - that these bastards start to fold like napkins, and Oprah's buddy from The Secret is discovering how true that is now:

Those attending the Spiritual Warrior retreat did not know that Ray already was being accused of misappropriating and misusing others' teachings without permission or proper training. They did not know that his claims to have been initiated into three shamanic traditions, gaining expertise in a variety of spiritual and esoteric teachings, were either exaggerations or questionable.

And they did not know that Ray's way of running a sweat lodge violated the spiritual and safety practices of the Native American traditions he claimed to follow.

Go - it's all broken down in the article - read the whole thing for yourselves. As I said, it's great, and a lesson in how the entire world-wide scam of NewAge is run. I don't care who it is or what they're up to (Ray has Bob Proctor, another notorious scammer from The Secret, testifying for him) it's all a lie, and a dangerous one at that.

They all have blood on their hands and, yeah, that even includes America's "moral leader" Oprah - without whom most of us would never have even heard the name "James Arthur Ray" to begin with - and, thus, those three people he's on trial for killing would still be alive.

Oprah gave James Arthur Ray credibility - as well as all the other charlatans who have ever graced her program - and she deserves to be on trial with them.