The Borg: It's Them Or Us 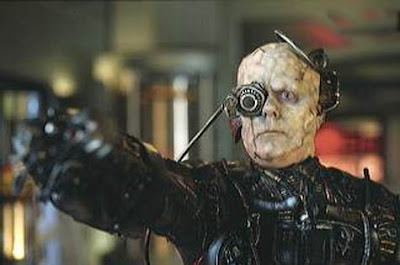 "No evidence,...is strong enough to penetrate its collective Borg-like hivemind,...the,...movement has much more in common with a cult religion than it does with anything rational.

This is the mindset we're dealing with,...Science doesn't matter. Evidence doesn't matter,...Reason itself doesn't matter. None of them matters, other than how they can be twisted to make,...conclusions that support the,...belief system, and any,...evidence conflicting with that belief system must be the result of a,...coverup. This is all just like a cult, where, the more evidence is presented to members that they are in a cult, the more tightly they cling to their cultish beliefs."

-- Orac - who has come a long, long way since we first engaged him on the subject of cultism - speaking about anti-vaccinationists, but who could also be talking about the behavior of those involved with spirituality (especially NewAge) and/or politics (especially Obama), on Respectful Insolence.