Making A Little Room (To Clear The Air) 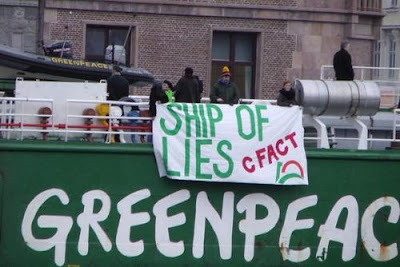 "When your attempt at recreating the Congress of Vienna with a third-rate cast of extras turns into a shambles, when the data with which you have tried to terrify the world is daily exposed as ever more phoney, when the blatant greed and self-interest of the participants has become obvious to all beholders, when those pesky polar bears just keep increasing and multiplying – what do you do?

No contest: stop issuing three rainforests of press releases every day, change the heading to James Bond-style 'Do not distribute' and 'leak' a single copy, in the knowledge that human nature is programmed to interest itself in anything it imagines it is not supposed to see, whereas it would bin the same document unread if it were distributed openly.

After that, get some unbiased, neutral observer, such as the executive director of Greenpeace, to say: 'This is the single most important piece of paper in the world today.' Unfortunately, the response of all intelligent people will be to fall about laughing,..."

-- Gerald Warner, admitting what the believers don't want the rest of us to know - that the farce of Global Warming has become a nasty-assed fart - but now there's no escaping the stench, even if you get it by The Telegraph.