No Wonder The Director's Known As An Asshole 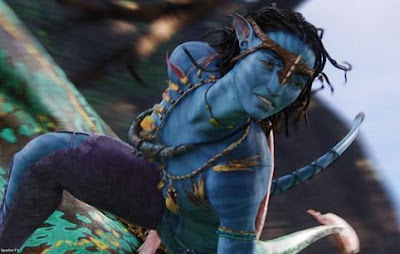 "Pandora is,...inhabited by the Na'vi, a race of blue-skinned, forest-dwelling giants who don't take kindly to the invaders razing their planet and disrupting their age-old (yet distinctly New Agey) communion with nature."

-- Dana Stevens, explaining how the plot of Avatar - a Sci-Fi movie that utilizes the biggest assortment of technological advances in cinematic history - was rendered "hopelessly fruity", embarrassingly stupid, trite, cultish, and utterly useless, before anyone had even seen it, in Slate.

I saw it - gave it a "6". Sorry, James Cameron, but - when a film takes place in the year 2154 - it's not a good idea to have your main characters spouting cliché's from 2004's Iraq War and pretending we haven't evolved past "lite beer and blue jeans". That's just dumb - or assumes we are - and, if we're that dumb, then why are we paying to see your Sci-Fi movie again?

Taking our money - and insulting our intelligence? Man, NewAgers have got a lot of balls,...