Man Of The Sheeple 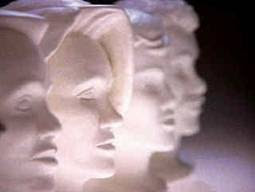 "Some parishioners in the Church of Obama discovered last week that their spiritual leader is a false prophet.

It was bound to happen eventually. Obama had become to his youthful supporters a vessel for all of their liberal hopes. They saw him as a transformational figure who would end war, save the Earth from global warming, restore the economy -- and still be home for dinner. They lashed out at anybody who dared to suggest that Obama was just another politician, subject to calculation, expediency and vanity like all the rest.

Certainly, Obama gets some blame for encouraging the messianic cult as he stumped for change and hope.

This is what happens when true believers mistake a mortal for a messiah."

-- Dana Milbank, speaking my language - lots of NewAge buzzwords with some "modern pig latin" thrown in - which, I betcha, they didn't teach him at The Washington Post.