A World Of Liars (Saying Be Happy About It) 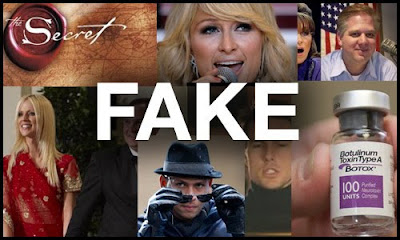 "The years from 2000 to 2009 were unified by fakeness — high-profile charlatans penetrated virtually every area of life."

-- Ravi Somaiya, certainly getting it right - just as I told you - but y'all don't listen (which is why you're stupid - and fake) to me, and Gawker.

From Gawker's list of fakes, which almost all have to do with something NewAge, here's my favorite:

"Fake jobs: 'Life coach' is a job that can exist only in a decade with not one but two economic bubbles, and the frantic prosperity they led to. The job — which is basically therapy given by those with no qualifications — garners over 42 million results on Google. Creative coach gets almost 27 million. Accountant, to put that in perspective, gets 31 million. Even those at the top of their fields, like Tony Robbins, who's even given a TED talk, have wound up in court for misrepresenting the impact of their nice words and quizzes. This year three people died when self-help 'guru' James Arthur Ray forced them to sit in a sweltering hot tent as a 'spiritual ceremony'. Also: The Secret is bullshit. If you want something, go out and work for it. Thinking about it doesn't affect the universe. Thanks."