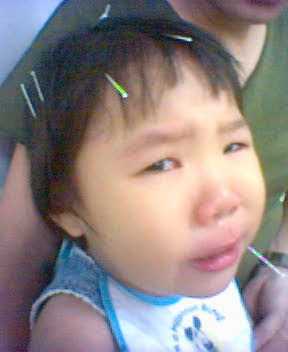 Whoo-boy! As you can see from the photo above (poor kid!) the loons are having a party!

It seems there was a widely reported German study that claimed acupuncture works for low-back pain. Not surprisingly, even medical sites were pumping it, making my crazy "Student of the Occult" ex-wife's words ("We're in the hospitals - we're getting legit - you'd better 'get it' before it's too late!") positively prescient. Unfortunately, the reports are also a crock - and the results of the study are the best argument against acupuncture yet. Follow me, Kids:

According to the researchers from Ruhr-University Bochum, fake or "sham" acupuncture worked just as well as "true" acupuncture. Here's exactly what they said:

"The superiority of both forms of acupuncture suggests a common underlying mechanism that may act on pain generation, transmission of pain signals, or processing of pain signals by the central nervous system and that is stronger than the action mechanism of conventional therapy."

But, since true acupuncture supposedly works by placing needles in specific places - along routes called "meridians" - to effect your (highly superstitious) "chi", then getting a positive response from placing needles just any ol' where proves there are no meridians or chi to be effected. Sticking needles in a person - anywhere - will produce a response. It's just like hitting yourself in the foot to relieve a headache. TMR's conclusion - which isn't likely to change anytime soon:

Acupuncture is for idiots.

This is also further proof the media, especially the BBC, is totally lame - and totally gullible - when it comes to stories on alternative medicine and NewAge beliefs. You might as well do like Brian Eno said and stick a needle in a camel`s eye: