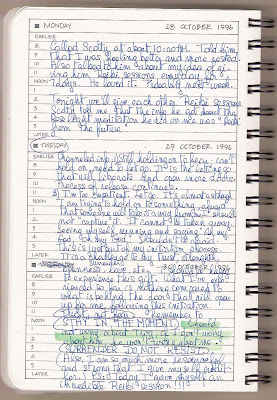 [Click On Photo To Read My Ex-Wife, Karine Anne Brunck, Explain In Her Own Words What Happened To Her Mind In A Diary Entry On The Reiki Cult Initiation Process.]

I had been on the phone with Karine for 6 months, while her mother was ill in France, giving her support and telling her how much I loved her, while listening to her tales of my mother-in-law's intense, and over-whelming, pain. Never a word about pain-killers. Rarely a word about the doctor. Just months and months of agony. But that was France. I'd seen what Michael Moore calls the "gold-standard" of medical care before. It could be so medieval I once told my mother-in-law, when she was well, that I was scared for her. (She pointed out the hospital had a helicopter, to fly her somewhere for better treatment, if necessary.) Now, there was nothing I could do from the United States, but be supportive to my wife.

After the funeral, Karine came back to America acting very bizarre. Strange from the first day: She didn't want to see anyone who came by to see her. Sex was lousy (after 6 months apart.). Talking between us was minimal. Our life just went on, unadorned by each other. I chalked it all up to the stress of death, funerals, jet-lag, and culture shock. But, as time went by, she also became mean, and stayed out day and night, only returning to drive me further up the wall with her obvious, self-inflicted, disappointments.

Then her girlfriend, Nadia Eisen, came to visit from Luxembourg. I liked Nadia but, this time, she brought an unusual nosiness with her. She started asking me probing questions, and, at one point, even tried to see if I'd sleep with her. I remember giving her, and Karine, a little speech over dinner, about what our marriage meant to me, and making it clear that Nadia wasn't in it. Nadia got seriously pissed at that and started claiming I was insulting her. I asked if crawling around in other people's marriages is a European thing, and she said yes, if they're friends. I informed her it's not customary in America. She and Karine, both, rolled their eyes at that one. This time, for once, I was glad when it was time for Nadia to go.

After Nadia's visit, Karine took to wearing headphones when she was home, listening, I assumed, to a new age radio station. She glared at me as I worked, killing me with her eyes when she walked across the room. She started talking about taking "a class", which I assumed meant she wanted to go back to college. That sounded like a good idea - for both of us - and I was glad she was thinking about the future again. But weeks went by and she didn't say another word about it. When I finally broached the subject, she revealed it was a Reiki class costing $500.00 a day - and it lasted for seven days. (She'd been going to "meetings" with the hand-wavers for a while.) Her saying I couldn't take the class too - a major concession, on my part, I thought - led to a big, ugly, horrible, screaming fight.

This was followed by more of her maneuvering: She claimed that I was holding her back "spiritually"; and she felt "oppressed", and maybe we should try some time apart. We started to talk about that, in light of her recent, unhinged, behavior, and things started to cool down. (I might be able to get more work done, I thought. I was barely getting anything done this way,...) Then she became tender. We both voiced deep-and-meaningfuls, had decent sex, and declared our love once more. I asked what's up with her: her moods were so chaotic and wild these days; but she wasn't revealing anything, just staring at me like she could see right through. Especially when I told her she should get some real interests. And new friends. Smarter friends. Like, maybe, doctors or something. She said she'd been thinking about doing just that.

That night, I couldn't sleep. Something was wrong but I didn't know what it was. But I did know I hadn't held my wife back spiritually. (She'd been into all kinds of goofy shit for years -more than I knew by a long shot - and all I ever said was I wasn't interested, and didn't want to come home to a dark, candle-lit, house full of incense because it made me nauseous.) And I also knew I'd never "oppressed" her - she'd always gone where she wanted, when she wanted; and all I ever asked, when she got back, is if she had a good time. No, something was really wrong, and, whatever it was, it wasn't letting me lie next to her and rest. So I went to the computer and looked up "Reiki".

Why I'd never researched Reiki before still eludes me (I didn't know why I was doing it then) but, over and over again, as I found one, goofy, pastel-colored new wage site after another, it made me sick to think my wife was so gullibly airy-fairy. I started to wish she would read more. Something other than magazines, anyway. Oh well, I thought, you picked her, and you love her more than yourself sometimes. Together we laughed, in surprised recognition, when Bruce Willis and Maria de Medeiros (playing his french love, Fabienne) turned up as a couple in Pulp Fiction. My wife and I, we could get that same dynamic, and be just that damn cute - just that damn complicated. We'd been through a lot together. There's still a lot to go. Whatever.

Impatient, I started skipping deeper into Google, and that's when the dirt started showing up: Pages that I thought I could trust - pages that weren't all rah-rah - were either making fun of Reiki, or started talking about it as worthless, or involved in various forms of criminality, health fraud, evil and occult practices, or declaring Reiki as a "cult".

That word scared me: Cults were Heaven's Gate, Jim Jones, Charley Manson, and David Koresh, and they all flashed across my mind as I read. I was starting to get scared for my girl. What the hell had she gotten herself into? Claiming, previously in our marriage, that she could walk through walls - or cure AIDS with her hands - was one thing, but being indoctrinated into a cult? And - oh snap! - there were all those weirdly "nice" Reiki people who came by the house and just stared at me with the whites of their eyes all big - were they cultists? Were they trying to indoctrinate me? What was going on? What the fuck was happening here? Is that what all this trouble is about? I needed some answers - now.

I walked back into the bedroom and turned on the light, asking in as cool a way as I could, trying to mask my apprehension:

Karine didn't say "What are you talking about?" or "No" or "Are you crazy?" or anything a normal person would say. She just started shrieking, "It's not a cult! It's not a cult! It's not a cult!" over and over again, which, in my head, started the theme from Hitchcock's Psycho playing in time. The floor started dropping out from under me, and my stomach started sinking, and I was becoming aware of something ugly, and dark, and malicious, taking the place of air - and I began to get really freaked out - really, really, scared - about whatever was happening to my wife's mind. About whatever was happening to our marriage.

And for the first time in my life, I had no idea what to say.