This Couldn't Have Happened To Some Nicer Guys,... 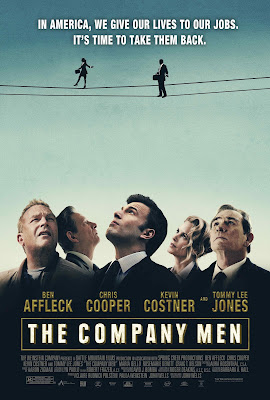 Have you ever watched a movie with no one to root for? I've rarely seen one, but I'm watching the 2010 corporate downsizing film, The Company Men, and - besides Chris Cooper, who's always awesome, and some black supporting actors who, for some reason, all seem pretty normal - I'll be damned if every other frigging character isn't 100% unlikable. Seriously. It's so brutal I had to stop the DVD and say so.

One of the few halfway decent guys in this picture (Tommy Lee Jones) is cheating on his clueless bitch of a wife (is the fact she's a bitch supposed to make me "understand" his adultery?) and the lead character, played by Ben Affleck, is such an entitled asshole I could care less if he ever finds another position. Affleck's character's brother-in-law, played by Kevin Costner, offers the douchebag a job doing construction work - but not until after making him endure a bunch of anti-corporate hoo-hah at every opportunity he gets. Parties, dinner, the stupid jerk just never let's up. Fuck, I wouldn't want to work for him either.

As Affleck's fortunes fall, I had to stifle a laugh, listening as he negotiates with bill collectors like everybody else (Poor baby, I was waiting for the words Top Ramen to come up but no such luck) and when he's finally forced to do manual labor, it's treated like some great realignment of his manhood - and of course another opportuniity for anti-corporate Costner to break his balls. Glad for that.

Rather than make me hate the financial meltdown of 2008, all this picture did, mostly, was make me hate the fact I've got to share my country with people such as these. From top to bottom, between these creeps and the NewAgers, this is an unintended expose' on why this place is such a mess. I can't help wishing a bucket of concrete would fall on somebody's head or something. Anything. Just. Make. Them. Stop.

Chris Cooper's character finally kills himself, naturally, feeling like I do every time I encounter the word "recycling" or "sustainable." But few care anymore about my plight than I can for these guys. Fair's fair.

I guess what I'm trying to say is, ultimately, there's only one thing I've learned so far from this lousy "compassionate" movie, but what it is, I knew before the opening credits rolled:


No matter how bad the vehicle, I like to see Ben Affleck suffer,...