So You're Leading A Half-Baked Sale 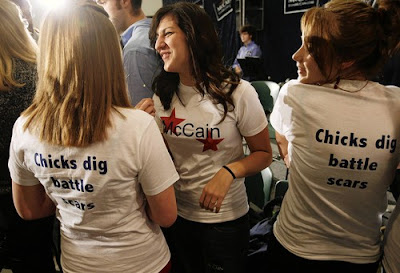 "McCain’s remarks were briefly interrupted by protesters wearing pink aprons and chanting 'McCain is in the kitchen with George Bush.' Security removed the protesters, who were loudly booed by the crowd. McCain got a standing ovation from the National Restaurant Association crowd when the protesters were gone."

-- Bret Hovell, a reporter for ABC News, on a McCain visit to Barack Obama's hometown of Chicago, Ill.