What To Do With White People Is Now A Trending Topic 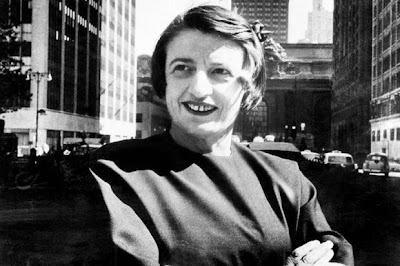 Ayn Rand, white's conservative cultist of selfishness and national irresponsibility - along with all the others - should never have been resurrected

Thank goodness, oppressed culture's don't naturally roam to making slaves, sending people away in cattle cars, or firing squads, because America's caucasians would be in some trouble going forward in history. Of course, TMR (always ahead of the cultural curve) long ago switched to an all-white-all-the-time-call-out format, while Salon's Brittney Cooper has only recently gotten to the point where whites have her "utterly undone." But it's Jezebel's Brit Bennett, who finally confesses what everyone's thinking: "I Don't Know What to Do With Good White People."

She's got me there, too, because - after my trial-by-fire with emersion in white "culture" - I now have a hard time identifying what "good" even means, in the shitshow that is white America revealed. I mean, considering what hardships whites are saddling blacks with, as I write this, would it be wrong for future generations to subject white's ever-more-unreasonable asses to slavery, cattle cars, and firing squads? White's obstinance (and laughter) in the face of our deaths, coupled with their historical willingness to see others suffer for their benefit, makes it a tough call. "Ethics," as we know it, becomes questionable in their presence - which, in a way, has always been the "good" white people's point.

Confronting the weight, of living with 4 centuries of white bullshit, I just wrote something like the following, in an email, to a "good" white person a few days ago:


"They decry black Americans for embracing “victimology,” and they disparage women for “playing the victim,” whenever anyone identifies incidents or patterns of racial or sexual injustice. It is of crucial importance to the right-wing project of constructing a society of solipsism to sketch a victimless world of capitalistic purity. If there are no victims, institutions are irrelevant, and there are no victimizers. If there are no victimizers, there is no need for external agitation from democratic organization or government enforcement of fair and consistent standards under the law."

Reading "a society of solipsism" really brings the point home, for me, because that's what TMR's been blogging about this place for almost a decade. This "modern" society that said the late (and suicidal) Spalding Gray was "brilliant" as he talked about pot affecting his "kundalini," and made multiple con men and women rich selling "The Secret," but today calls Will Smith's Scientology-schooled kids "crazy" for spouting the same inherited garbage everyone was applauding as they grew. (Picking on the black kids really brings the cowardice of these people, not to mention their corrosive racial dynamics, into view.) I could say, "make up your minds, people!" but I'm no longer sure many others have one - or ever have. It's just been my slow torture, equal to anything I've read in the recent report that's got everyone so outraged, now. You've all become Dick Cheney, dripping with evil and the stench of death, to me.

And the world turns. By 2044, whites will be the minority and the kids of these monstrosities, who will be spouting THEIR PARENT'S inherited nonsense, won't have the cover of their parent's superior numbers - so what to do? I imagine future generations will be at a loss, because protecting those who've always been hurting blacks, merely to protect their egos, won't be a winning proposition to the formally oppressed. White's perversion of MLK's teachings are already causing non-violence to lose it's currency and, after another 30 years, and faced with this already-heavily-armed white population, I can't see how it'll last. (If whites don't believe in non-violence - and their heavily-advertised and newly-purchased arsenals clearly say they don't - why will anyone else?)

And it's today's remorseless "good" white people, through their open hostility and willful inaction, that will have made it so. They demanded it be this way, and everyone's finally heard them, and these "others" will have no choice but to respond accordingly.

I guess, looking at it objectively, only a very-pre-emptive "congratulations" - for any future carnage to caucasians - are all that can reasonably be offered,...