And This Makes The Joker Who? 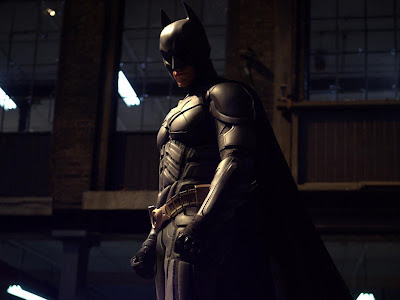 A cry for help goes out from a city beleaguered by violence and fear: A beam of light flashed into the night sky, the dark symbol of a bat projected onto the surface of the racing clouds . . .

There seems to me no question that the Batman film "The Dark Knight," currently breaking every box office record in history, is at some level a paean of praise to the fortitude and moral courage that has been shown by George W. Bush in this time of terror and war. Like W, Batman is vilified and despised for confronting terrorists in the only terms they understand. Like W, Batman sometimes has to push the boundaries of civil rights to deal with an emergency, certain that he will re-establish those boundaries when the emergency is past.

And like W, Batman understands that there is no moral equivalence between a free society -- in which people sometimes make the wrong choices -- and a criminal sect bent on destruction. The former must be cherished even in its moments of folly; the latter must be hounded to the gates of Hell.

"The Dark Knight," then, is a conservative movie about the war on terror. And like another such film, last year's "300," "The Dark Knight" is making a fortune depicting the values and necessities that the Bush administration cannot seem to articulate for beans.

Conversely, time after time, left-wing films about the war on terror -- films like "In The Valley of Elah," "Rendition" and "Redacted" -- which preach moral equivalence and advocate surrender, that disrespect the military and their mission, that seem unable to distinguish the difference between America and Islamo-fascism, have bombed more spectacularly than Operation Shock and Awe.

Why is it then that left-wingers feel free to make their films direct and realistic, whereas Hollywood conservatives have to put on a mask in order to speak what they know to be the truth? Why is it, indeed, that the conservative values that power our defense -- values like morality, faith, self-sacrifice and the nobility of fighting for the right -- only appear in fantasy or comic-inspired films like "300," "Lord of the Rings," "Narnia," "Spiderman 3" and now "The Dark Knight"?

The moment filmmakers take on the problem of Islamic terrorism in realistic films, suddenly those values vanish. The good guys become indistinguishable from the bad guys, and we end up denigrating the very heroes who defend us. Why should this be?

The answers to these questions seem to me to be embedded in the story of "The Dark Knight" itself: Doing what's right is hard, and speaking the truth is dangerous. Many have been abhorred for it, some killed, one crucified.

Leftists frequently complain that right-wing morality is simplistic. Morality is relative, they say; nuanced, complex. They're wrong, of course, even on their own terms.

When heroes arise who take those difficult duties on themselves, it is tempting for the rest of us to turn our backs on them, to vilify them in order to protect our own appearance of righteousness. We prosecute and execrate the violent soldier or the cruel interrogator in order to parade ourselves as paragons of the peaceful values they preserve. As Gary Oldman's Commissioner Gordon says of the hated and hunted Batman, "He has to run away -- because we have to chase him."

That's real moral complexity. And when our artistic community is ready to show that sometimes men must kill in order to preserve life; that sometimes they must violate their values in order to maintain those values; and that while movie stars may strut in the bright light of our adulation for pretending to be heroes, true heroes often must slink in the shadows, slump-shouldered and despised -- then and only then will we be able to pay President Bush his due and make good and true films about the war on terror.

Perhaps that's when Hollywood conservatives will be able to take off their masks and speak plainly in the light of day.

-- Andrew Klaven, on "What Bush and Batman Have in Common," in the Wall Street Journal.