"John" John In The John John (With All The Rest) 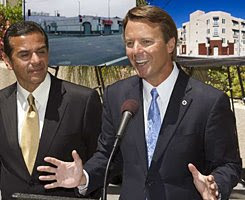 "This was a sensational scandal the LAT and other MSM papers passionately did not want to uncover when Edwards was a formal candidate, and now that the Enquirer seems to have done the job for them it looks like they want everyone to shut up while they fail to uncover it again. ..."

-- Mickey Kaus, on the news of a Los Angeles Times blogger gag order about the John Edwards affair, on Slate.com

Wonkette's take is the best so far:

"The important question is not “Why is John Edwards cheating on his wife who had cancer?” We know that answer: He’s a Democratic politician."

And, yes, this is the same uber-cynical Wonkette that, when this story first broke, asked:

What kind of monster would cheat on a woman with cancer!

Why? Let's recap recent history - or as I like to call it - going on the Left-wing Morality Tour:

Bill Clinton: rewarded by the Democrats for countless affairs, gropings, rapes, and attacks on women. Hillary even joined in the fun. And so did the party. All while posing as radical feminists. Good start, huh?

San Francisco mayor Gavin Newsom: slept with his best friend/campaign manager's wife. When she was drunk. Newsom's current fiancé decided to bad-mouth the best friend's wife, apparently, to rub salt in the best friend's wound even more. Then Newsom crashed the best friend's attempt to recover, financially, from the blow of losing his job because his boss was scum. Oh, and the people of San Francisco followed all that by giving Newsom a 75% approval rating in the next election, right after Newsom did some bullshit treatment, for a short period of time, at the recovery center of his choice - which was ran by a friend of his. *Sweet*

LA mayor Antonio Villaraigosa: ran on a Left-wing Family Values ticket. To make the point clear, his last name is even he and his wife's last names combined. Fucked a stupid news reporter with a reputation for power fucking (sleeping with politicians) as a way to get ahead. He helped her get a house - how you say? "Cheep." Los Angelinos (especially Hispanics) went ape shit crazy when the story broke but the furor has died down - until John Edwards went to visit his NewAge "Love Child" after spending the day with Villaraigosa.

I say throw all the bums out, Democrats: they make YOU - yea, you - look bad. Very bad.

The John Edwards story is supposed to break this weekend.